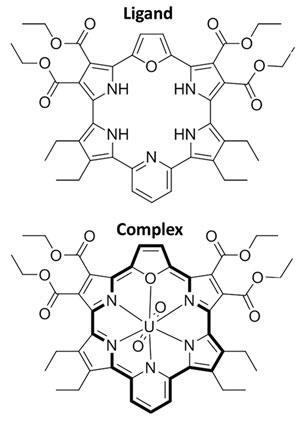 Nanoparticles that can be detected with photoacoustic imaging when they complex with uranium ions could open the door to new plans of action after radiological incidents, like Chernobyl or Fukushima, US researchers claim.

Ultrasound imaging is a well-known technique – it’s used during pregnancy and to assess joint injuries, amongst other things. The basics are simple: sound comes in and sound comes out; the difference in backscattered sound is turned into an image. Analogously, in photoacoustic procedures a pulse of light goes in and some of its energy is absorbed. This energy heats the local area and produces a pressure wave as it expands, which is measured acoustically.

Jesse Jokerst from Stanford University, in collaboration with colleagues at the University of Texas, has designed a class of porphyrinoid-containing nanoparticles that only absorb light when the porphyrinoids contain a uranyl cation, but not in its absence. Aromaticity changes when the actinide complex forms allowed Jokerst to use photoacoustic imaging to pinpoint uranium in mice administered with the nanoparticles. This new approach could allow researchers to detect uranium in the body, non-invasively and in real time.

‘The choice of a porphyrinoid ligand is very clever,’ affirms Elisa Tomat, from the University of Arizona, US, an experienced chemist in the field of porphyrin chemistry. ‘Since the optical properties of these ligands are effectively modulated by metal coordination, multiple opportunities for in vivo detection will become available upon future applications of this approach,’ she added. 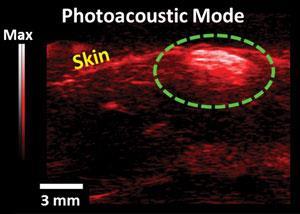 Photoacoustic imaging can detect the actinide complex in vivo

At the moment, the isotope chelation cannot be started directly in the tissue, so they need to administer a pre-formed depleted uranium complex; consequently, their next step will work to overcome this significant limitation. Long-term, the team’s vision is to create a wide set of porphyrinoid nanoparticles to quantify and chelate different radioisotopes so they can be removed from the body.

This study can be particularly relevant for the defence community, and Jokerst is radiant about its expected applications. ‘Eventually, the hope is that we can use these nanoparticles and give them to someone after an exposure event, such as a terrorist attack,’ he says. ‘These particles cannot only quantitate and report the presence of a radioisotope, but also potentially clear it from the body.’