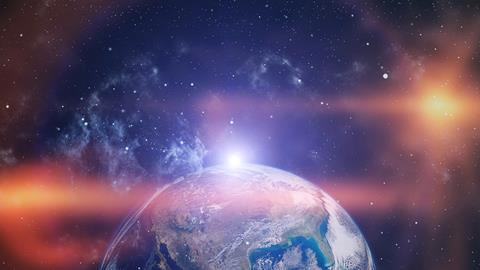 Scientists in the US have carried out experiments confirming that ultraviolet light could have driven the synthesis of simple prebiotically important sugars under conditions found on early Earth.1 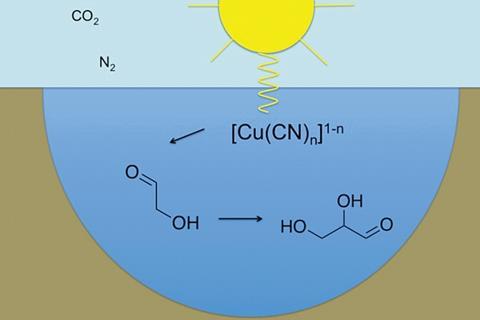 UV light photooxidises cyanocuprates, producing aqueous electrons, which are key for putting into motion a reaction network capable of producing glycolaldehyde and glyceraldehyde

Back in 2012, Dougal Ritson and John Sutherland,2 at the Medical Research Council Laboratory of Molecular Biology in Cambridge, UK, synthesised sugars from cyanocuprates using ultraviolet light – findings that supported the RNA world hypothesis for the origin of life. Now Zoe Todd and Dimitar Sasselov from the Harvard-Smithsonian Centre for Astrophysics, and their colleagues have performed similar experiments, but at lower, and more representative, wavelengths than those previously considered.

‘They [Ritson and Sutherland] did a great job in pioneering the area and showing that you can actually make sugars from cyanocuprate,’ says Todd. These initial experiments used a mercury emission lamp, which was a cheap, easy, yet powerful source of UV light, but meant that Ritson and Sutherland only studied cyanocuprate photochemistry at 254nm and 266nm. Todd and Sasselov looked at the possible composition of the Earth’s atmosphere 4.6 billion years ago and found that lower wavelengths of ultraviolet light, which Earth’s current atmosphere filters out, may have been present on the early earth. So they wondered ‘Can we take their system and scale it down to other wavelengths and further decrease the [reactant] concentrations to make it more prebiotically plausible?’ 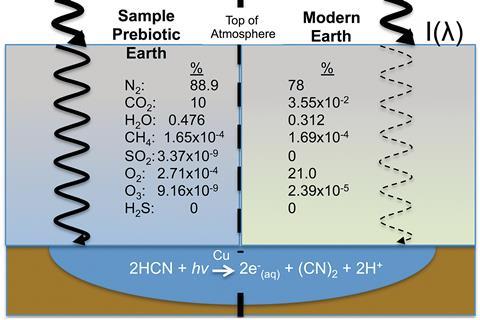 Todd and Sasselov therefore studied other wavelengths. ‘Because of our apparatus, we actually had to scale concentrations down significantly, which helped out with prebiotic plausibility because you’re not going to find tonnes of this stuff on the early earth,’ adds Todd. Their experiments revealed that photoexcitation of cyanocuprates to yield the 2- and 3-carbon sugar blocks necessary for prebiotic synthesis was actually more efficient at lower wavelengths than those originally considered by Ritson and Sutherland. These wavelengths of ultraviolet light were also sufficient to drive the formation of sugars even at the low reactant concentrations expected on the Earth during this era.

These results could apply to early Mars or other exoplanets orbiting stars similar to our sun and could even aid in the search for life outside of our own solar system. ‘If the route to life did require ultraviolet light to drive chemical reactions of the type described, then consideration of constraints imposed by the chemistry, atmospheric composition and solar output could be used to help refine the habitable zone around stars,’ comments Ritson, who wasn’t involved in this latest study.

The results demonstrate the successes of an interdisplinary approach to solving the complex question of how life might have evolved on earth, marrying chemistry and astronomy to provide a more plausible solution to this mystery. Sasselov believes that these results are just one piece of a much larger puzzle: ‘We are working on many more such cases and hope to piece them together into a big (and beautiful) self-consistent picture of how life could emerge from chemistry.’