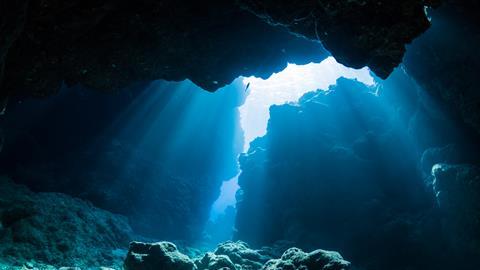 The amino acid tryptophan has been detected deep beneath the seafloor. Its discoverers believe it wasn’t life that created this chemical but geochemical processes. The finding supports the idea that alkaline deep-sea hydrothermal systems could have provided ideal conditions for producing the organic molecules necessary to kick-start life on Earth.

Amino acids are integral to life as the building blocks of all proteins, as well as enabling crucial biological functions in their own right. However, this throws up a ‘chicken and egg’ conundrum: if amino acids are required for – and made by – life then how did life get started without them?

Amino acids have been discovered on meteorites suggesting an extra-terrestrial abiotic source of the compounds. Meanwhile, experiments and theoretical calculations have shown that amino acids could have been synthesised abiotically on Earth under the right conditions. But no one has ever found a naturally occurring non-living mechanism for their production. 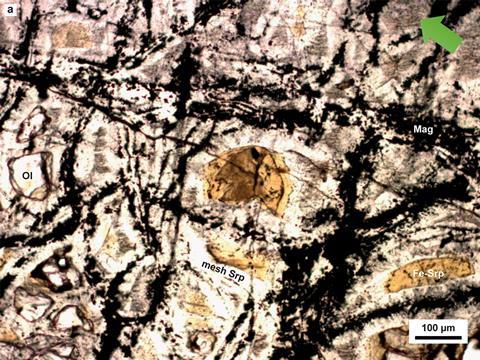 Optical microscopy image of a sample of serpentinite where the abiotically produce tryptophan was discovered. Image also show olivine (Ol) and magnetite (Mag), with the green arrow showing orientation of sample

Now, Bénédicte Ménez at Paris Diderot University, France and her colleagues have identified the amino acid tryptophan – and other organic molecules – preserved in rock samples taken from almost 175m below the mid-Atlanic ocean floor at the Lost City hydrothermal field. Ruling out biological sources and contamination, the researchers suggest these chemicals formed from interactions between seawater and mantle-derived rocks called serpentinites, which would have been abundant in the prebiotic Earth’s crust.

‘The first building blocks of life must first have been produced abiotically, so it is very exciting to have evidence for the production of amino acids in serpentinised peridotites,’ comments Andrew McCaig, who investigates hydrothermal systems at the University of Leeds, UK, and was not involved in the study.

To analyse the core samples, the team combined three high resolution imaging techniques that all pointed to tryptophan inside a network of clay nanopores. Although amino acids have been detected in fluids at the Lost City site before, their source was unknown. The team are confident that the tryptophan they identified was abiotic in origin because they found no evidence of biomarkers or other amino acids which would suggest a biological source.

The researchers propose that the tryptophan could have been synthesised in the nanopores of the iron-rich clay when it formed during hydrothermal alteration of serpentinites. The team also detected indole, which is an intermediate organic compound in the synthesis of tryptophan via Friedel–Crafts-type reactions, and indicates the nanopore network may have acted as a confined microreactor to promote this reaction, while the iron-rich clay helped catalyse it and subsequently aided its preservation.

‘Hydrothermal alteration of mantle rocks never ceases to amaze me,’ says Frieder Klein, a geochemist at Woods Hole Oceanographic Institution, US. ‘This remarkable study corroborates the idea that hydrothermal systems, which likely existed throughout most of Earth’s history and possibly elsewhere in the solar system, have the potential for the abiotic synthesis of amino acids and possibly even more complex organic compounds.’

However, not everyone is convinced. ‘The spectroscopic evidence for the detection of tryptophan in this work is not terribly strong and so it seems very unlikely to me,’ says Jim Cleaves, who investigates geochemistry and the origin of life at the Tokyo Institute of Technology, Japan. He explains that some of the fluorescence spectra peaks do not match up very well, suggesting that the data could similarly fit other compounds. ‘Even if tryptophan was conclusively detected, it seems plausible there has been fluid flow within these samples providing an avenue for biological contamination.’

Jeffrey Bada, who investigates the geochemistry of amino acids at the Scripps Institution of Oceanography, US, agrees. ‘The supposed tryptophan smells like an artefact to me,’ he says. What’s more he questions its relevance to the origin of life. ‘Tryptophan is not an amino acid commonly thought to be part of the prebiotic compound inventory on the early Earth and elsewhere. It has only one codon in DNA, which has been interpreted as indicating it was a late addition.’

However, although tryptophan may not have been one of the original amino acids required for life to emerge, Ménez and colleagues argue that amino acids can act as biochemical precursors that catalyse the synthesis of sugars, aldehydes and nucleotide intermediates.