Oxygen can be produced from carbon dioxide using UV radiation 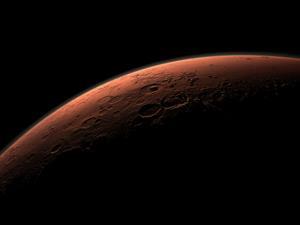 A direct mechanism for producing oxygen from carbon dioxide using far ultraviolet radiation has been experimentally demonstrated by researchers in the US, confirming a 14-year-old theoretical prediction.1 The work could be important for modelling the early atmosphere that gave rise to life on Earth. It may also help researchers studying other planets to predict and explain their atmospheres, perhaps estimating whether they might harbour life.

The vast majority of the oxygen on Earth today is produced by photosynthetic organisms, whose evolution led to the so called ‘Great Oxidation Event’ 2.4 billion years ago. However, some palaeobiologists believe that small quantities of oxygen produced abiotically were present before this. The shortest wavelength ultraviolet light, called vacuum ultraviolet (VUV), is today absorbed by oxygen in the upper atmosphere; but with oxygen concentrations so low, significant quantities would have penetrated deeper. Photons under about 200nm in wavelength can break the carbon-oxygen bonds in CO2. Previously, the only known abiotic mechanisms for O2 production under early-Earth conditions were two-step processes whereby CO2 is reduced by VUV to CO before the displaced oxygen atoms combine. This latter step requires a third particle to absorb the energy liberated when the diatomic molecule is formed.

In 2000, theoretical chemists Der-Yan Hwang and Alexander Mebel calculated that the shortest VUV wavelengths (around 100nm) should be able to split CO2 directly into carbon and oxygen.2 Now researchers at the University of California, Davis have confirmed this spectroscopically using a pump-probe apparatus containing two high-power vacuum ultraviolet lasers. ‘To my knowledge, there is no other device like this anywhere in the world,’ says group member William Jackson.

The first laser excited CO2 molecules in a cold molecular beam into a dissociative state, before the second beam ionized the fragments produced for analysis using a time-of-flight mass spectrometer. The complex dynamics of the diatomic oxygen molecule would produce a wide variety of rovibrational states, each with slightly different energies, and the multiple small peaks would have been lost in the spectrometer’s noise. The researchers therefore looked for the carbon atoms, which could only be in three possible spin-orbit states. Analysing the energies of the fragments produced, they found good agreement with theoretical predictions. Only about 5% of the CO2 molecules that broke up produced oxygen molecules, with the remainder going to carbon monoxide. Nevertheless, say Jackson and co-author Cheuk-Yiu Ng, this could conceivably contribute a significant proportion of the oxygen under some planetary conditions.

Mebel, now of Florida International University, is impressed. ‘The experimental evidence is pretty remarkable,’ he says, as it was ’a very difficult experiment’. Most chemists in the field will not be surprised to learn that the reaction takes place, he suspects, but quantitative knowledge of the proportion of dissociating CO2 atoms that produce O2 will be extremely useful to atmospheric modellers. ‘The test of how important this finding will be,’ he explains, ‘will be to include this channel, where they now have a very concrete and solid branching ratio, to atmospheric models of the early-Earth, of Mars et cetera, and see how the models will be affected. We may be about to predict some new chemistry we didn’t know about.’

Astrobiologist James Kasting of Penn State University in the US agrees the reaction needs to be added to photochemical models, but he suspects it is unlikely to make much difference. ‘There are orders of magnitude more photons at 200nm than at 100nm,’ he explains, ‘So you’re not going to affect the overall photolysis rate very much.’ Furthermore, he says that wavelengths this short would be more readily absorbed by CO2 in the upper atmosphere, so they would probably not penetrate anywhere near the Earth’s surface. ‘Our models go up to around 80 or 100km for an Earth-like atmosphere,’ he says. ‘This radiation at about 100nm is almost certainly absorbed above 100km.’