A breathable and biodegradable adhesive patch to block fungal invasion of vine pruning wounds has been developed by nanotechnology scientists in the US. 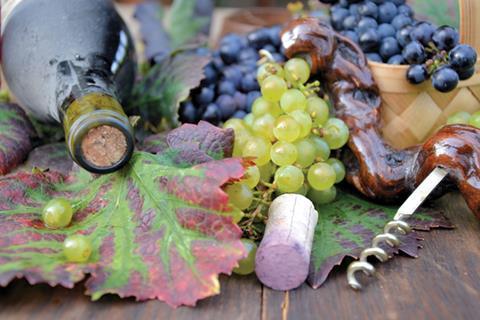 Esca is a big problem for the wine industry

Symptoms of fungal disease esca, or vine decline, include reduced yields, stunted growth and even the sudden death of vines. Esca is prevalent throughout the world and poses a significant threat to the wine industry – some countries have lost 40% of their grape harvest to the fungus. Often whole collections of vines have to be removed and replaced. No fungicide treatment is available – sodium arsenite was previously used for control in Europe, but is now banned for health reasons.

Pruning leaves vines particularly vulnerable. Cuts, an easy entrance for fungi, can be sealed with wax or tar, but this hinders healing and can contaminate the soil. The new patch developed by Alexander Yarin, of the University of Illinois, and coworkers contains a dense network of nanofibres and can be directly applied to the vine to physically prevent spores from entering a wound. ‘These fungi are 20–50µm in size and our nanofibre patches have a pore size of about 3–5µm, so the fungi are intercepted by this obstacle,’ explains Yarin.

The nanofibres are made from a half-and-half blend of a biodegradable synthetic polymer and soy protein, an abundant waste product, using the electrospinning technique, which draws fine threads from a solution using a charged tip. A non-toxic adhesive is either included in the blend, or applied afterwards, and the nanofibres are supported by an outer pad of porous rayon fibre. Biodegradation happens over several months; just enough time to block out fungi while healing takes place beneath the breathable membrane.

Rain, extreme temperatures and uneven wood could affect performance and biodegradability, but calculations have already shown that the adhesion of the patches is enough to withstand high wind speeds. ‘No other membranes have such high shear specific adhesion energies as Yarin’s. This membrane is absolutely a promising material capable of protecting against fungi attack,’ says Bin Ding, an expert in applications of nanomaterials for environmental protection at Donghua University in China.

The patches have now been sent to a plant pathologist in California to test their behaviour and effectiveness against esca under field conditions.

This development is just one part of ongoing efforts to develop high-value products from soy waste, and could be used to protect many other fruit trees and bushes from similar fungal infections.