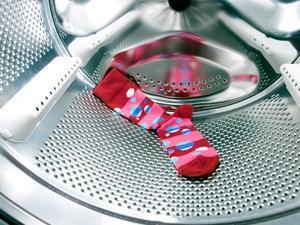 Scientists in Switzerland have discovered that more silver nanoparticles in clothing are released the first time they are washed than when they are sent to landfill.

Nanosilver’s antimicrobial properties often see it added to textiles, including socks and sportswear. Making, washing and disposing of the clothing can release the silver into the environment. Despite posing a low risk to humans, silver ions are toxic to many aquatic organisms and can accumulate in the food chain.

Denise Mitrano and colleagues at the Swiss Federal Laboratories for Materials Science and Technology sought to understand this release. Building on previous work, they considered how consumers treat their clothes by investigating the effects of washing more than once, and by using different types of detergent.

The team found that the largest metal release occurred when they used detergents with an oxidising agent and washed the fabric multiple times. They also simulated leaching to understand what happens when clothing eventually ends up at landfill. ‘We have found that most silver comes off during the first wash, and a negligible amount is lost during the end of life phase,’ comments Mitrano.

These results bring into question the antimicrobial properties of clothing after the first wash. Uneven release could also be of concern, so will aid environmental risk assessments. The results will update models to be more realistic about silver loss during washing, and maintain the current assumption that landfill is the final sink for these particles.

Henning Wigger, a research associate in engineered nanomaterials from the University of Bremen, Germany, says the work provides an insight into the life cycle: ‘Their experimental setting is closer to real influences to which a product is exposed. This is a step forward in assessing potential environmental exposures of nanomaterials.’

Commenting on the work, Amro El Badawy, an environmental engineer at California Polytechnic University, US, says:  ‘Deciphering the mechanisms of transformations of nanomaterials under the experimental conditions is key to our ability to predict any environmental implications – this work gets us closer to achieving this goal.’