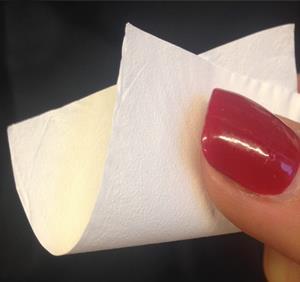 The zeolite film is highly flexible making it suitable for packaging

Stinking foods including the world's smelliest fruit – the durian – could soon have their undesirable odours eliminated during storage and transport thanks to cheap packaging made from composite films of zeolite and nanocellulose. These films can adsorb the gas molecules responsible for their smell and the Swedish researchers behind the work think the material could also be incorporated into clothing to remove unwanted odours.

When Lennart Bergström at Stockholm University was visiting Singapore he first became aware of the issue surrounding the transport and storage of foul smelling fruits and vegetables. In Singapore the durian fruit, which can smell as bad as raw sewage, is not permitted on the subway system and has been banned by some hotels and airlines. But the fruit is prized for its flavour so growers and suppliers of durians are keen to find ways around this problem.

Inspired by this problem, Bergström and his team set out to find a solution using their extensive experience of both zeolites and nanocellulose. The microporous nature of zeolites gives them exceptional adsorption properties and their use in odour-eating products is not new. However, introducing microporous adsorbents into polymer films suitable for packaging had remained a challenge.

'The new material relies on the well-established adsorption of small gas molecules by zeolites; the key novelty lies in the use of nanocellulose as a binder and matrix,' says Bergström. 'By using nanocellulose as a matrix and binder, it is possible to prepare films with higher amounts of adsorbents [the zeolite] than before. The films are also thin, strong, light and flexible,' he explains.

The researchers made their films using colloidal processing by first making two separate dispersions: one of zeolite particles, which also contained calcium ions and polyethylene glycol (PEG), and another comprising cellulose nanofibrils (CNFs). These dispersions were then mixed together before undergoing calcium ion induced gelation and vacuum filtration to produce a gel, which was dried to produce thin and flexible zeolite-CNF films with a very high zeolite content of 90% or more. Analysis showed that the films can eliminate volatile thiol-based odours to concentrations lower than those detectable by humans.

'Using zeolites is a nice idea,' says Russell Binions who investigates nanocomposite thin films at Queen Mary University of London, UK. 'Typically the vapour uptake will be determined by the relative partial pressure of whichever chemicals are kicking about in the headspace, so the fact that they show some kind of selective binding that prevents re-vapourisation of the nasty volatiles is a big plus and represents an important development.'

'It does not take too much imagination to foresee them being included in all manner of fibrous materials for odour elimination, certainly paper and the like and possibly clothing,' Binions adds. 'The only thing that I wonder about is whether this is a multiple use system?'

Bergström says the films cannot be regenerated at present but their uptake capacity is high allowing them to be used several times before they are saturated. 'No major limitations remain and scale-up for industrial production is certainly feasible.'