A single-atom platinum catalyst could replace the highly toxic mercury one used to synthesise the ingredient to produce PVC. The new platinum catalyst is twice as efficient as the one used by industry, could cut mercury pollution and should be suitable for scaling-up.1

Vinyl chloride production is one of the most common industrial processes in the world, with global production estimated at over 50 million tons per year. Up to a third is synthesised using acetylene hydrochlorination that relies on a highly toxic mercury catalyst. 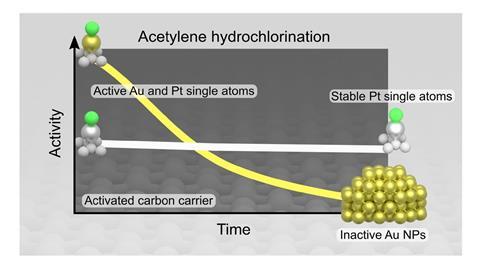 ‘More than half of the mercury produced worldwide is used as a catalyst in vinyl chloride production,’ explains Javier Pérez-Ramírez at ETH Zurich, who led the study. ‘A great deal of it, around 40 tons annually, evaporates and ends up contaminating the atmosphere.’ In order to find a more environmentally friendly solution, researchers have explored other catalysts, particularly gold and ruthenium supported on activated carbon. However, there are a number of problem with these solutions. ‘Metal-based catalysts suffer from deactivation, mainly due to the reduction of the active metal sites due to sintering and fouling,’ explains Pérez-Ramírez.

The team decided to explore platinum as an alternative. The preparation of the catalyst is straightforward. ‘We deposit the platinum impregnating activated carbon in an aqueous solution of chloroplatinic acid,’ Pérez-Ramírez says. Platinum atoms stay anchored to the carbon’s pores, and the catalyst was then activated by heating it. Using similar metal loadings and reaction conditions described in the literature for gold catalysts, Pérez-Ramírez’s team managed to double the efficiency of the process. ‘Considering that platinum is currently 40% cheaper than gold and the low metal loadings we use, this process should be very attractive to the chemical industry,’ he points out.

To find the best platinum catalyst, the team modified the synthetic conditions to yield different metal nanostructures – from single atoms to nanoparticles – and carbon-based supports, and probed their performance using both experiments and theory.

‘The integration of experiments and DFT was paramount to understand the particular active site and the reaction mechanism that account for the high-stability of platinum single atoms deposited on activated carbon,’ explains Núria López from the Institute of Chemical Research of Catalonia, who led the computational work. The computational work also explains the instability of metal-based catalysts supported on nitrogen-doped carbon. In the last few years, chemists have incorporated nitrogen to better anchor metal atoms to the support. However, these new results actually suggest that it favours the formation of coke, poisoning the catalyst.

Graham Hutchings, a catalysis expert at the University of Cardiff, UK, explains that platinum catalysts tend to deactivate really quickly, and he is impressed by how they ‘managed to stabilise them for the production of vinyl chloride by carefully tailoring the carbon support’. ‘They also achieved a selectivity comparable to already available gold catalysts, and no trace of polymerisation or any undesired sub-products,’ he notes. Nevertheless, he is sceptical about the possibilities of platinum defeating gold. Hutchings’ team has collaborated with industrial partners to produce a gold–sulfur catalyst for vinyl chloride production that is ‘three to five times more active, and stable at commercial scale for thousands of hours’.2

Pérez-Ramírez acknowledges Hutchings’ long-standing contributions in gold catalysis, but still sees advantages for their platinum one. ‘Our results show that gold atoms agglomerate and deactivate,’ he says. ‘Plus, when using gold, one often relies on aqua-regia to prepare the catalyst, which is not very environmentally friendly.’

‘To my knowledge, this is the first report of a highly active and stable platinum catalyst used for the synthesis of vinyl chloride, and it opens a new avenue towards greener catalysts,’ says Tao Zhang, an expert in new materials for catalysis working at the Dalian Institute of Chemical Physics of the Chinese Academy of Sciences. This work could be particularly important in China, where ‘above 75% of vinyl chloride production still relies on mercury-based catalysts’.

Both Zhang and Hutchings think that the new process is far from finding an industrial application, as researchers have only demonstrated its stability for 70 hours. But Pérez-Ramírez and his team remain optimistic, and believe a pilot plant trial for this platinum-based process ‘seems well feasible’.