Pnicogens link up as new bond is discovered

German researchers have discovered a chemical oddity - a new type of intramolecular interaction between group 15 atoms, which is as strong as a hydrogen bond. These interactions could be used to build supramolecular structures.

Pnicogens, group 15 elements, such as nitrogen and phosphorus, are well known for acting as Lewis bases, or electron donators. However, researchers at the University of Leipzig, Germany, have found that instead of repelling each other, two pnicogen atoms can attract each other, forming non-covalent bonds.

’Typically when you look at group 15 compounds, such as PR3, you would always regard them as a Lewis base,’ says author Eva Hey-Hawkins. ’You would not expect two Lewis bases to interact because both have lone pairs of electrons.’ 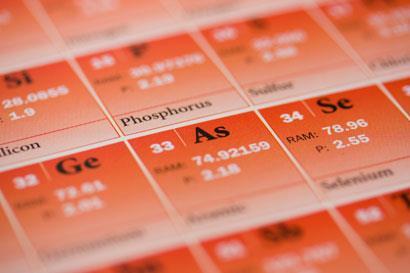 Group 15 compounds can form interactions as strong as hydrogen bonds

The team looked at how a number of known PR3 compounds interacted with each other. ’We calculated interaction energies and were astonished that they could be as large as hydrogen bonds - around 20 kJ mol?1,’ says Barbara Kirchner, who led the theoretical study.

The team suggest the pnicogen atoms interact with each other by donating a lone pair into an antibonding P-R orbital of the other atom. While the lone pair itself is an area of negative charge, electrostatic potential calculations show that this is surrounded by a band of positive charge. ’This is the way you can imagine two molecules interacting - because there is both positive space and negative space,’ says Kirchner. Preliminary calculations suggest nitrogen, arsenic and antimony behave in a similar way.

’I think it’s quite interesting - it’s an unexpected bonding,’ says Bernd Engels, a theoretical chemist at the University of W?rzburg, Germany. ’I think it’s too early to say if there are consequences, but it’s of interest for basic research.’

The researchers hope to use these new interactions, in place of hydrogen bonds, to build supramolecular structures, such as molecular machines. ’With phosphorus as one of the building blocks this could result in networks that have similar strengths as those based on hydrogen bonds,’ says Hey-Hawkins. ’By using phosphorus you would have a broader way of varying the properties of donors and acceptors just by varying the substituents.’