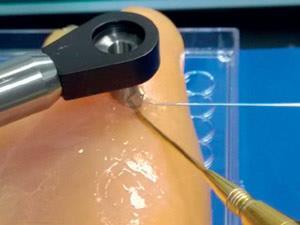 A new method for hunting down micro-tumours or even individual cancer cells in apparently healthy tissue has been developed by US scientists. The technique, which depends on nanobubbles generated when nanoparticles are hit with a laser, can also kill cells that cannot be safely removed by surgery and help to prevent recurrence of cancers.

Surgical techniques for removing tumours continue to improve, but before tumours can be removed they need to be found. This is a significant problem in many aggressive tumours of the head, neck, brain, lung and breast, where complete removal of the visible tumour can leave behind separate nodules in healthy tissue called microscopic residual disease (MRD). Despite sometimes being only tens of cells in total and invisible to the naked eye, they can regrow into a cancer that can kill. The only technique in current clinical use to detect MRD is analysis of tissue slides, but this takes time and has limited sensitivity. Surgeons often have to take an educated guess and remove millimetres or even centimetres of apparently healthy tissue around the tumour – balancing the health effects from removing normal tissue against the risk of the cancer returning or spreading. Radiotherapy and chemotherapy can help mop up MRD, but they are not always effective and can have severe side effects. Worse, even when tumours are identified, they can be inaccessible to surgery.

Dmitri Lapotko of Masimo in Irvine in the US and colleagues used gold nanoparticles tagged with antibodies against a receptor present only in cancers. When these nanoparticles are injected into the bloodstream, they accumulate in cancer cells. Irradiating the cancer cells with a short infrared laser pulse causes the gold nanoparticles to convert the light energy to heat by a process called plasmon resonance. This leads to extremely localised vapour expansion and instantaneous collapse of a so-called plasmonic nanobubble, literally exploding cancer cells without damaging surrounding healthy cells. By detecting the resulting shock wave with an ultrasound probe, the researchers could detect and pinpoint individual cancer cells at a depth of 1mm and tumours as small as 50µm, or 30 cells, 4mm deep. ‘The current threshold of detection in the clinic is several millimetres, and in [other techniques under investigation] it is about 1mm,’ says Lapotko. ‘To achieve a 1mm-sized tumour you need a million cancer cells.’

The researchers injected antibody-tagged nanoparticles into mice with head and neck squamous cell carcinoma – a highly aggressive, often-lethal cancer that commonly recurs after surgery. After 24 hours, they operated to surgically remove the primary tumours. In some of the mice, they applied the plasmonic nanobubble procedure to locate MRD during surgery. In cases where they could safely do so, they surgically removed millimetre-scale regions of tissue where the nanobubbles were detected until all the nanobubble signals vanished. All these mice survived with no cancer recurrence, whereas almost all the mice died after standard surgery alone. Notably, however, mice in which the nanobubble detection procedure had been performed lived significantly longer even when the researchers had been unable to surgically remove the MRD. This shows that, as well as detecting them, the nanobubble procedure destroys many, though not all, residual cancer cells.

The researchers are working to transfer the technique into the operating theatre. Gold nanoparticles are already clinically approved for use in the human body, so the team is preparing clinical trials in head and neck cancer surgery in Belarus.

‘It’s the ultimate goal of the surgical oncologist to treat the presence of MRD in real time,’ says Gooitzen van Dam, a professor of surgical oncology at the University of Groningen in the Netherlands. He believes that, at present, the detector is too fine to be useful in the operating room as a surgeon would not know where to position it. ‘You need a macroscopic detector to downsize your area of interest into which you can put your detector for single cells,’ he says. Nevertheless, he believes this is ‘solvable’, concluding the paper presents ‘a very nice and potentially ground-breaking concept’.