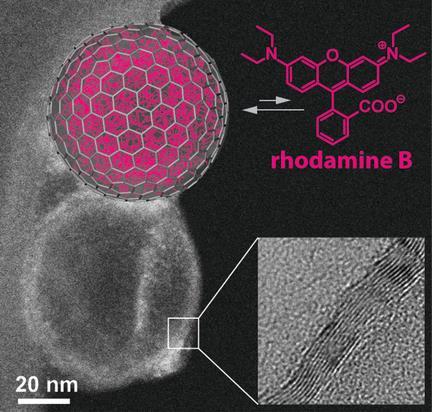 Carbon nanobubbles that are hydrophilic on the outside but hydrophobic on the inside have been produced by researchers in Switzerland. The nanobubbles, which can be loaded with fat-soluble chemicals or anti-cancer drugs, can be dispersed in water, potentially providing an attractive means to run reactions requiring organic catalysts in aqueous solutions or to deliver drugs.

The most famous example of a spherical carbon molecule is C60, but the space inside is limited to a few atoms, and it is difficult to get them in and out. To solve this problem Wendelin Stark and colleagues at the Swiss Federal Institute of Technology in Zurich produced larger, multi-layer carbon nanobubbles from commercially available carbon-coated cobalt nanoparticles. They functionalised the surfaces of the nanoparticles with a negatively charged polymer to make them hydrophilic, before etching away the metal nanoparticles inside with hydrochloric acid. The acid attacked the metal but left the polymer coating intact, creating a tiny bottle that is hydrophilic on the outside and yet lined with hydrophobic unfunctionalised graphene-like layers.

The researchers showed that hydrophobic cargoes such as the dye rhodamine B can be drawn into the bubble and accumulate in the hydrophobic interior at concentrations 10,000 times greater than outside of it. Stark suggests reactions involving hydrophobic reactants or catalysts could be run by dispersing catalyst-loaded solvent in water, removing the need for large quantities of expensive and potentially polluting organic solvent.

The anti-cancer drug doxorubicin, which is difficult to administer as it is both highly fat-soluble and very toxic, could be dispersed in water by loading it into the nanobubbles, Stark says, although clinical trials of safety and effectiveness would be needed. He adds that the nanobubbles might be further developed to facilitate smart drug delivery to tumours, for example. ‘The only reason that things go in and out right now is the hydrophobicity of the cavity. But because all this is carbon chemistry – an extremely elaborate tool – I personally believe it will not take long until we or others design a cap for the nanobubble. Now the bottle is there, people have to work on the cork.’

‘Similar things have been done, normally with bigger particles, with calcium carbonate or cadmium carbonate,’ says physical chemist Helmuth Möhwald of the Max Planck Institute for Colloids and Interfaces in Potsdam. ‘Also the surface functionalisation has been done. What is new here is that with this you can create a completely hydrophobic core.’ He praises the small size, which he says might allow the capsules to penetrate filters that catch other similarly-rigid capsules in drug delivery, but says controlled cargo release is needed before he can get really excited.