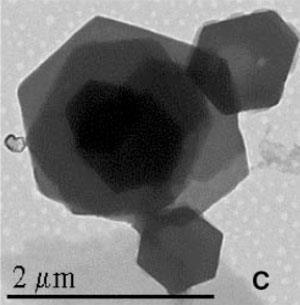 Update: The paper that was the focus of this story was retracted on 26 April 2021

The journal Science has posted an expression of concern over a controversial 2004 paper on the synthesis of palladium nanoparticles, highlighting serious problems with the work. This follows an investigation for the US funding body the National Science Foundation (NSF), which decided that the authors had falsified research data in the paper that reported that crystalline palladium nanoparticle growth could be mediated by RNA.1 The 2013 report on the issue by the Office of Inspector General of the NSF, and a letter of reprimand from May last year, were recently brought into the open by a newspaper article.

The chief operating officer of the NSF identified ‘an absence of care, if not sloppiness, and most certainly a departure from accepted practices’. Recommended actions in the office’s report included sending letters of reprimand, requiring the subjects contact the journal to make a correction and barring the two chemists from serving as a peer reviewer, adviser or consultant for the NSF for three years.

Science notes that, though the ‘NSF did not find that the authors’ actions constituted misconduct, it nonetheless concluded that there “were significant departures from research practice”.’ The NSF report noted it would no longer fund the paper’s senior authors chemists Daniel Feldheim and Bruce Eaton at the University of Colorado, Boulder, who ‘recklessly falsified research data’, unless they ‘take specific actions to address issues’ in the 2004 paper. Science said it is working with the two authors ‘to understand their response to the NSF final ruling’.

Feldheim and Eaton have been under scrutiny since 2008, when an investigation by their former employer North Carolina State University, US, concluded the 2004 paper contained falsified data. According to Retraction Watch, Science said it would retract the paper as soon as possible.

Whistleblower Stefan Franzen, a chemist at North Carolina State University (NCSU), who collaborated with the two chemists, initially did not suspect anything was wrong with the 2004 paper. ‘Once we got the [grant] money, Dan Feldheim acted very different from in our previous collaborations. He discouraged me from finding out the mechanism. We should have been able to see the nucleating event and see the growth of the crystals,’ Franzen says.

Later a student indicated during a 2005 group meeting that the particles were around 95% carbon. ‘No one in my group could understand what was going on,’ Franzen recalls, until finally I realised that the starting material was completely insoluble in water. His lab then discovered that solvent was added to the mixture, sometimes 50% or more, but this was not stated on the paper. ‘The particles were simply aggregates of the starting material and essentially they would form aggregates and had hexagonal shapes, like snowflakes, which all depended on the solvent mixture,’ Franzen says. A long dispute followed between the two groups.

Science never looked into the matter objectively, adds Franzen. Another researcher, James De Yoreo at Pacific Northwest National Laboratory in the US, found that the Feldheim–Eaton results were not reproducible. He later wrote a paper with Franzen describing how similar crystals could be grown in the absence of RNA.2

The NSF report is ‘very strong’, says Franzen. ‘But I am perplexed by our system. If you were a graduate student and you were found to have done one-tenth of what these guys did, you would be dismissed.’ Feldheim told the Daily Camera newspaper in Colorado that he sees the NSF final report as an exoneration, as the agency did not issue a finding of research misconduct.

In an email, Eaton said that the dispute comes down to a page in a graduate student’s notebook where a negative control came up positive. He highlights a follow-on paper that ‘not only reproduced the science perfectly they explained more clearly what the RNA was doing’.3

‘I am now retired from CU and not research active mainly because every time I tried to publish a paper Franzen would launch a misconduct allegation,’ Eaton wrote. He says he was found not guilty of misconduct by NCSU, Colorado University and the NSF and criticises ‘the actions of a US government agency that only spent one hour asking me questions in 10 years’.

The follow-on paper was invalid, as shown in a technical comment I wrote,4 Franzen counters. ‘There is nothing in this work that supports the hypothesis that the particles are palladium.’ He criticises attempts to turn ‘a scientific issue into a personal one’. ‘I have published consistently. When I finally reported the matter to NCSU officials I had tried for nine months to correct the record internally.’
Franzen views the NSF move as smart. ‘It goes back to the 1950s charter of the NSF that if you fail to report accurately you can lose your funding for life, which is a punishment more severe than if they found misconduct,’ he says. ‘If they found for research misconduct, these guys would have taken it to court and strung the process out for years.’

Comment was requested from Feldheim and the University of Colorado, Boulder, but no response was received.

Correction: The article was updated on 28 January 2016 to include the role played by the Office of Inspector General