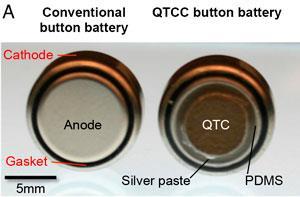 Scientists have developed a protective coating for button cell batteries that stops curious children that swallow them from being injured.

Round button batteries are often mistaken for sweets or toys, but swallowing them can be very dangerous. When the batteries get wet they generate a current that breaks down water to produce hydroxide ions that can build up and damage tissues, resulting in internal bleeding that can cause death in extreme cases.

‘There are 3000–4000 reported battery ingestions per year in the US, mostly in small children,’ says Jeffrey Karp from Harvard University in the US. In the UK, several recent high profile deaths have prompted doctors to call for a national campaign to highlight the dangers to parents.

Most efforts to improve safety focus on preventing the batteries being swallowed in the first place, by making battery compartments on electronics harder to open. But Karp and his colleagues have developed a different approach – a coating for the battery that only allows it to conduct electricity when under pressure, allowing it to function normally inside a device but preventing it setting up a current and damaging tissues if it is swallowed.

The ‘quantum tunnelling composite coating’ consists of metal microparticles suspended in an electrically insulating silicone material. ‘The particles are too far away [from each other] to conduct a current but when you push on the material, the particles get within 1–5nm and can carry a current,’ explains Karp.

The team tested batteries coated with their material in a pig’s oesophagus and showed that, unlike untreated batteries, they didn’t cause tissue damage. ‘We also showed the batteries still work perfectly with the coating when placed into devices like a laser pointer,’ says Karp.

As an added bonus, the silicone coating has a waterproofing effect, which could improve the shelf life of batteries or allow them to function better in humid environments. The next step, Karp says, will be to scale up production, and he and the team are also working on making their coating compatible with different types of batteries.

Philip LeShirley, product safety consultant at the Royal Society for the Prevention of Accidents, welcomes the idea of a safety coating on batteries, but also stresses the importance of other preventative measures. ‘Parental supervision and making these batteries far less accessible so they can’t be ingested is still the best way to address this issue,’ he says. ‘But clearly that doesn’t always happen. We welcome any product onto the market place which has the potential to reduce accidents and save lives.’