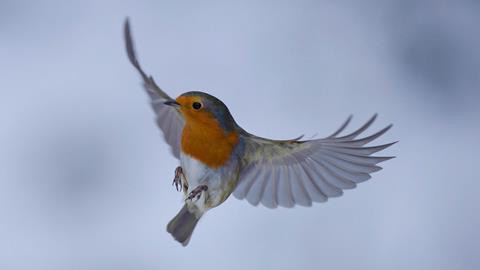 Researchers have discovered a radical-pair reaction in the eyes of migrating robins that could explain how the birds use Earth’s magnetic field to navigate.

Covering up to 200miles (320km) per night, some UK robins – not all of which migrate – fly all the way to southern Spain or Portugal to spend the winter. Just as humans use compasses, these birds can sense Earth’s tiny magnetic field. But how they do this remains uncertain.

The idea that radical-pair reactions might underlie birds’ magnetic field sensitivity was first proposed in 1978 by physicist Klaus Schulten. Radical pairs are field-sensitive because each radical’s unpaired electron has a magnetic moment arising from its spin. The pair has a singlet state in which the two spins are antiparallel and a triplet state in which they are parallel. A reaction in a magnetic field can influence the radical-pair intermediates and thereby alter product distribution.

The research community began to pay attention to Schulten’s proposal in 2000, after he and his colleague Thorsten Ritz proposed that cryptochromes could be responsible for birds’ magnetoreception. In vertebrates, cryptochromes play roles such as maintaining a 24-hour clock cycle. In other organisms, they undergo photochemical radical-pair reactions – this is how they regulate growth in plants.

Now, researchers in the UK, Germany and China have for the first time shown a radical-pair reaction in lab-synthesised cryptochrome 4, a protein found in the eyes of night-migratory European robins. The cryptochrome binds the oxidised form of a flavin adenine dinucleotide (FAD) cofactor. When exposed to blue light, FAD can be reduced to a radical, which subsequently forms a radical pair. It can then either be reoxidised or undergo a further reaction – the relative likelihood of these depends on the radical pair’s spin state.

The product of this second reaction could be a ‘signalling state’ that stimulates neurons in the birds’ brains. ‘The net result is that, once all the radicals have reacted either back where they started or forward to the signalling state, you get a quantity of the signalling state of the protein that depends on the presence, strength and direction of the field during the lifetime of the radical pairs,’ explains physical chemist Peter Hore of the University of Oxford, one of the researchers who led the study. The cryptochrome 4 found in non-migratory pigeons and chickens did not show this magnetic-field dependent reaction.

‘The cryptochromes seem to be located in the cone cells, which are principally used for colour vision – and birds, like humans, don’t see colour under low light conditions,’ Hore says. ‘These are nocturnal migrants, so it’s possible that the visual signalling pathways are taken over by the magnetic signals at night when the birds need to use their compass. That’s just a speculation we’re looking into, but it’s a very attractive idea that the birds literally see the magnetic field.’

Eric Warrant of the University of Lund in Sweden is impressed. ‘The [researchers] have managed to reveal that three of the biophysical properties of cryptochrome to allow it to act as a magnetosensing molecule are actually fulfilled,’ he says. ‘The first thing they’ve demonstrated very clearly is that the radical pair is highly magnetically sensitive in the European robin… The second is that the reaction products are formed in a great enough yield to be realistically useful as signalling substances, and the third is that they’re produced for a sufficiently long time – at least the order of milliseconds – to be able to activate a neuron… It still hasn’t proved [the mechanism] completely and utterly, but it’s brought us really, really close.’

But behavioural biologist Roswitha Wiltschko from the Goethe University Frankfurt, Germany, is sceptical. While an advocate for the cryptochrome radical pair hypothesis, she argues that several aspects of the researchers’ cryptochrome 4 mechanism are inconsistent with studies in live birds. For example, she says, it requires blue light, and yet birds can sense magnetic field in narrowband green light. ‘I have nothing against the study itself, that’s probably fine,’ she says. ‘But the interpretation that this is now the magnetosensor, that’s definitely not right.’ She advocates instead an alternative hypothesis involving cryptochrome 1.

The researchers hope live animal tests will prove possible, but they will be difficult, says Hore, as migratory robins cannot be bred in captivity.