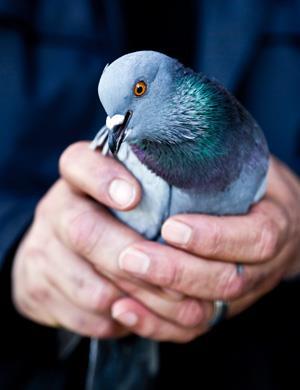 The way some animals use the Earth’s magnetic field to navigate has puzzled scientists for decades. Now, a group in China has identified a protein in fruit flies which they say could form part of a biological compass to help them orientate themselves. The rod-shaped protein can align with a magnetic field, and forms a complex with light-sensitive cryptochrome proteins, which scientists have long suspected may be involved in magnetoreception.

Various animals – including insects, birds and giant turtles – can navigate using the Earth’s magnetic field. But the precise mechanism for how they are able to do this is not well understood.

Scientists have shown that proteins called cryptochromes – which are involved in light detection – may be important, as insects genetically engineered to lack them lose the ability to respond to a magnetic field. But the proteins themselves do not respond to a magnetic field, so there is clearly more to the story. Others suspect that iron-containing compounds such as magnetite, which have been found in the cells of pigeons and other species, are responsible.

Can Xie and colleagues at Peking University combined both of these ideas to come up with a model for a brain-based ‘biocompass’ which contains both cryptochrome (Cry) and another, magnetically-responsive protein (MagR) that acts as the needle of the compass. They searched for potential MagR candidates in the well-characterised genome of Drosophila fruit flies – first screening in silico to identify proteins capable of binding iron. The initial screen identified 199 candidate proteins, which the team narrowed down to 98 by selecting those which were expressed in the right part of the fly (the head) and the right part of the cell (the cytoplasm) to bind the cryptochrome. They then did a literature review and chose 14 candidates to purify. Of these, only one made a stable complex with the cryptochrome.

Further tests supported the biocompass model – observations using an electron microscope suggested the complex between MagR and cryptochrome could spontaneously align in the presence of a magnetic field. The group also screened other species’ genomes and showed variants of both proteins were highly conserved across several animals, including pigeons, monarch butterflies, whales and even humans.

Xie and colleagues think they may have discovered a ‘missing piece of the puzzle’ explaining how cryptochrome enables animals to sense magnetic fields. ‘The biocompass model we present here may serve as a step towards fully uncovering the molecular mechanism of animal navigation and magnetoreception,’ they concluded.

Steven Reppert, who studies magnetoreception and navigation in butterflies at the University of Massachusetts, US, agrees the findings are ‘provocative and potentially ground-breaking’. ‘The idea that a novel magnetoreceptor has been discovered in animals that has such interesting attributes – incorporating the two major magnetosensing systems into one – is huge and will certainly shake up the magnetoreception field,’ he says.

Reppert emphasises, however, that the work must be followed up with whole-animal studies to ‘show [whether] the endogenous MagR/Cry complex is indeed functioning as a magneto receptor’.