Researchers in the US have demonstrated the presence of quantum mechanical effects in acid–base interactions, challenging the Brønsted–Lowry theory. The resultant short hydrogen bond is stabilised by a delocalised proton, which rapidly shuttles between the acid and base molecules and is characterised by highly unusual spectral features.

The Brønsted–Lowry theory was proposed in 1923 and explains acid–base interactions in terms of proton transfer. This theory is one of the cornerstones of chemical understanding and is amongst the first principles taught to school students. But despite a growing appreciation for the limitations of traditional thinking, the surprising discovery of a quantum component to such fundamental reactivity was entirely serendipitous.

‘It was luck,’ admits Daniel Kuroda of Louisiana State University, one of the principal researchers involved in the study. ‘We were looking at the structure of liquids … and saw this paper [about an acid–base mixture] with close to the conductivity of sulfuric acid but no ionisation. We wanted to see what the structure was … so we started looking into the project and then realised that clearly we have something very different.’ 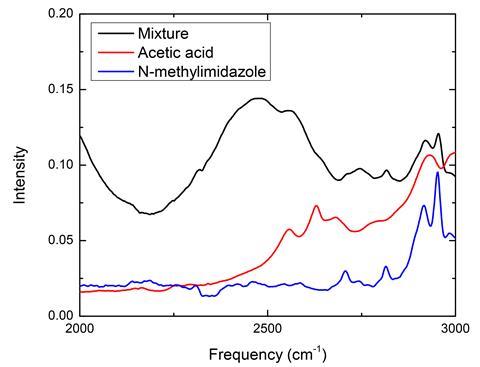 Kuroda, alongside collaborator Lu Wang at Rutgers University, began by using infrared (IR) spectroscopy to analyse the spectroscopic features of different mixtures of acetic acid and 1-methylimidazole. As a weak acid, acetic acid is expected to react spontaneously with weak bases such as 1-methylimidazole to form acetate and imidazolium ions, respectively. But instead of the expected acetate peak at 1560cm-1, the team was surprised to observe extremely broad bands between 2200cm-1 and 3500cm-1 in all non-aqueous mixtures. ‘When you mix two liquids, you can describe the IR spectrum as the sum of the two individually,’ explains Kuroda. ‘This case gave us something completely different.’

Using computational modelling techniques to probe possible interpretations of their data, Kuroda and Wang hypothesised that these broad peaks arose from the formation of an acid–base complex. Direct interaction of the acetic acid hydroxyl group with the nitrogen of 1-methylimidazole resulted in an unusually short hydrogen bond, stabilised by the rapid shuttling of the proton between both molecules. ‘Quantum mechanical effects make a big difference, especially when we think about energy barriers,’ explains Carlos Baiz, an expert in computational and spectroscopic techniques from the University of Texas at Austin, US. ‘The proton itself is quantum mechanical, and it can be thought of in terms of resonance structures that coexist.’

This type of non-classical behaviour has previously been observed in the active sites of enzymes, but Kuroda and Wang are the first to report the spectroscopic signatures. ‘This [research] is important because it shows that in order to interpret the measured [IR] spectra, we need to consider these quantum mechanical effects,’ continues Baiz. ‘For the wider community, it changes the way that we think about chemistry.’

Reflecting on the impact of this work, Kuroda hopes that it challenges other researchers to be open-minded in their approach to chemistry. ‘There might be other reactions where quantum mechanics plays a significant role,’ says Kuroda. ‘I think that in the future we should integrate chemistry more.’