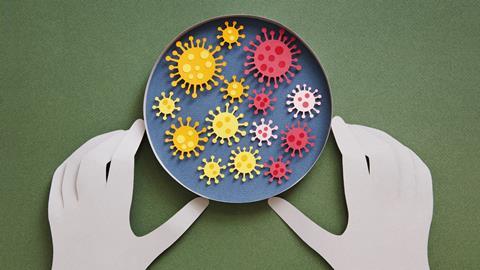 The ability of the Covid coronavirus Sars-CoV-2 to mutate into more dangerous forms has scuppered plans for the UK to remove its remaining pandemic restrictions on 21 June. On the 14 June, prime minister Boris Johnson announced that, with infections rising rapidly and hospital admissions likely to follow suit, full opening-up would be delayed for a month. This is in spite of the fact that almost half of the UK population have been fully vaccinated, and many others have had one dose. The new variant now predominating in the UK, called the delta variant – previously B.1.617.2 or the Indian variant – and accounting for more than 90% of new infections, not only transmits about 60% more effectively than the previously dominant form (B.1.1.7 or Kent variant, now designated alpha) but is also better at evading the vaccines. Two shots of the AstraZeneca vaccine gives just 60% protection, compared with 74% against the alpha variant, and one dose gives only around 33% protection.

Meanwhile, other variants such as the beta – B.1.351 or South African variant – and gamma – P.1 or Brazilian variant – run rampant across much of the world. It seems inevitable that others will emerge – and the nightmare is that one might evade almost entirely the immune response created either by previous natural infection or by vaccines. There is an urgent need, then, to understand the molecular mechanisms that make these variants more transmissible, perhaps more liable to cause serious illness, and more resistant to vaccines. 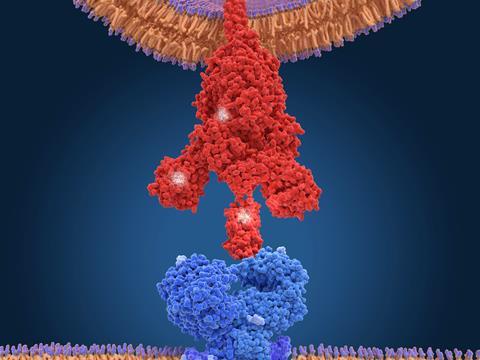 The B.1.1.7 coronavirus variant also known as the Kent variant and recently renamed alpha. The rise of new variants of concern has scientists worried that they might evade vaccines or natural immunity from contracting the disease

Viral mutations that increase the rate of transmission were always likely. There was little sign of problematic mutations during the first wave of the pandemic in the spring and summer of 2020, because the lack of any population immunity meant there was no strong selective pressure to generate them. But now, says virologist Greg Towers of University College London, natural and vaccine-induced immunity creates a driving force for the evolution of increased viral transmission. In some ways the coexistence of widespread infection with a fairly high level of population immunity creates the worst danger, as it creates a strong selective pressure within a big pool of circulating virus.

Although some virologists have expressed surprised at how fast the problematic variants have emerged given that Sars-CoV-2 has a lower mutation rate than flu viruses, systems biologist Nevan Krogan of the University of California, San Francisco in the US explains that the problem is that the coronavirus is so much more transmissible than flu and so creates more mutational opportunities.

What all this means for virulence is an open question until we have more data. Certainly, says Towers, there is no real basis for the common claim that viruses get faster-spreading but less harmful as they evolve. In fact, he says, there is some evidence that the alpha variant does cause worse disease, or symptoms that last for longer.

Have successful mutations arisen independently – that is, by convergent evolution to the same ‘good’ strategy – or because variants share a lineage? It’s hard to tell, says Towers, because there are relatively few mutations, so that it’s difficult to construct a reliable phylogenetic tree. For example, a mutation denoted E484K in the spike protein, which protrudes from the virus’s lipid coat and attaches to human cell membranes by binding to a cell surface receptor protein called ACE2, has been identified in the alpha, beta and gamma forms, each first seen in locations on different continents. That looks like convergence, says Towers – but ‘you can’t rule out that somebody was on a plane between Brazil and the UK around that time’. E484K denotes a substitution of a negatively charged glutamic acid for a positive lysine residue at position 484 in the spike’s amino-acid sequence.

Uncovering the secrets of variants’ virulence

Much of the previous work on mutations, says Towers, has focused on the spike protein. Mutations that enhance its binding affinity to ACE2 may increase the rate of transmission and infection – and indeed spike mutations are involved in all of the four major variants of concern. In the delta variant now dominant in the UK, a spike mutation designated L452R may be allowing the virus to enter cells more efficiently.1

But Towers and his co-workers, in collaboration with Krogan’s lab, have just released a preprint2 on the alpha variant showing that the key to its increased infectiousness – about 50% greater than earlier forms – seems to lie elsewhere. The researchers infected human cell cultures with the virus, and Krogan’s team used mass spectrometry to identify which proteins were present. The researchers found large amounts of a viral protein denoted Orf9b.

Krogan says his team recognised this as an ‘old friend.’ Late last year they identified it as a protein encoded by Sars-CoV-2 that interacts and interferes with a protein called Tom70, which plays a vital role in our cells’ innate immune system3 – the general-purpose immune response that is immediately triggered by foreign particles. Tom70 is involved in transporting proteins to the cell’s mitochondria before they attain their active forms, and also interacts with a protein in the mitochondrial membrane that kicks off an antiviral response. So if Tom70 is hobbled by Orf9b, our immune defences are compromised and the virus is better able to replicate in infected cells. 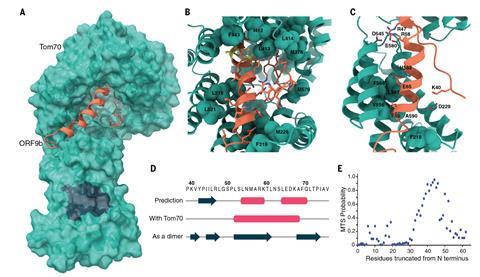 Cryo-EM structure of ORF9b–Tom70 complex reveals ORF9b adopting a helical fold and binding at the substrate recognition site of Tom70. B and C show a magnified view of ORF9b and its interaction with Tom70, a protein that is important in humans’ innate immune response

But while that happens with all forms of the coronavirus, with the alpha variant the expression of Orf9b is cranked way up high, ‘like it’s on steroids’, says Krogan. The researchers also saw raised levels of two other proteins known to antagonise host immunity, called Orf6 and N.

It’s no surprise that Sars-CoV-2 tampers with our immunity. All viruses, says Towers, have to find some way of dealing with the host organism’s immune system. Small ones like HIV tend to do that by stealth, trying simply to go unnoticed for long enough to replicate, while big ones like herpes viruses actively interfere with the immune response.

But such interference may be the key to the success of the alpha variant. ‘There’s a realisation now that we’ve got to start looking at mutations outside of the spike protein’, says Krogan. ‘We’ve really got to understand how the virus can mutate to overcome our defence mechanisms.’ It seems this need not involve any changes in viral protein sequences themselves, but simply making more of those that do the dirty work – apparently by some change in the regulation of expression rates. As with cells themselves, the genomes of viruses include nucleic-acid sequences that don’t encode proteins but are instead involved in gene regulation. These complex regulatory sequences are often poorly understood, says Towers.

Might the latest threat – the delta variant – also use this strategy? Certainly, the latest evidence confirms that it is even better than the alpha variant at evading both the antibodies raised by natural infection by the original form of the virus and by the vaccines. Even doubly vaccinated people can become infected and can transmit the virus, although they are very unlikely to develop severe Covid-19 symptoms.

Towers, Krogan and colleagues are studying the delta variant too, but haven’t finished their analysis yet. The delta variant has 18 mutations in eight proteins, seven of which are in the spike protein. But the one mutation in alpha that the researchers think is cranking up Orf9b doesn’t appear in delta. So it may be achieving the same goal of suppressing the immune response, but in a different way. ‘There’s so much work to be done on these variants,’ says Krogan.

What does this mean for vaccine resistance? All the vaccines currently in use prime our immune system against viral infection by raising antibodies against the spike protein of the original first-wave virus. A revamped vaccine might incorporate spike sequences from several newer variants, says Towers, as well as other viral proteins: a cocktail tailored to the variants anticipated to be most prominent in the next wave, as is currently done for flu vaccines.

But that’s not going to be enough if the virus is actually inhibiting the ability of the antibodies to trigger an immune response in the first place. ‘We’re going to need many strategies to combat it,’ Krogan says. ‘It’s not just that we’ll vaccinate and we’re done.’ He says that to combat the strategy of the alpha variant, we’ll need to make the immune system itself more secure – that is, to intervene not with the virus but with the host. So he thinks that future vaccines, faced with evasion mechanisms like this, might have to be a mixture of viral antigens along with drugs that target the host, boosting or protecting our immunity. ‘If we could target one of our proteins that the virus needs, you wouldn’t have to worry about resistance,’ he says. Hitting our own proteins might incur toxicity issues, but using such drugs at low concentrations for a short time could be warranted for such a nasty disease.

At any rate, says Towers, it’s vital to understand why enhanced transmission happens – because ‘the variant that evades vaccines is going to be the one that replicates best’.