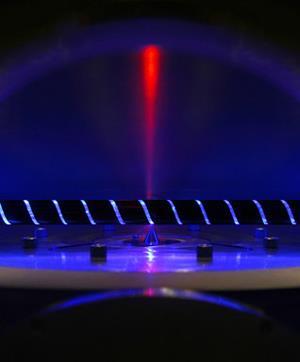 After around forty years of indirect evidence suggesting its existence, an elusive intermediate at combustion’s heart has finally been directly measured. David Osborn and his colleagues at Sandia National Laboratories in the US have identified hydroperoxyalkyl – or QOOH – radicals. The measurements will make combustion models used for designing engines more accurate, the team says.

‘QOOH radicals are the switchyard of ignition chemistry,’ explains Osborn. ‘They’re where ignition either slows down, propagates at a steady rate, or takes off to a full flame.’ Earlier experiments have indicated that these radicals originate from a bond breaking in a hydrocarbon denoted ‘R’, leaving R as a radical. Oxygen molecules can then react with R, making a peroxy radical, denoted ROO, where the electron is carried on an oxygen atom.

A hydrogen atom from the hydrocarbon can then shift to the oxygen radical, forming the radical intermediate denoted QOOH. Unlike ROO, QOOH can react with another oxygen molecule. ‘Then, this intermediate can break up into three radicals which, if they do the cycle again, would create nine radicals, and so on,’ says Osborn. ‘That can lead to a rapid temperature rise and full-blown flame.’

Normally QOOH disintegrates faster than it is formed. The team had been exploring using 3-pentanone, whose single double bond could share electrons with the highly reactive radical, to stabilise it. When this still disintegrated too fast, researcher John Savee suggested using 1,3-cycloheptadiene, which has two double bonds.

Using Lawrence Berkeley Laboratory’s powerful synchrotron UV light source for photoionization mass spectroscopy, Osborn’s team could discern intermediates with the correct mass and ionization energy for the 1,3-cycloheptadiene-derived QOOH. Increasing oxygen concentrations sped up both the intermediate’s formation and its decay, confirming its place in the expected reaction sequence.

Mark Blitz from the University of Leeds, calls the first detection of QOOH ‘very important’. ‘Direct detection opens up the possibility of definitively determining its chemical properties, like how fast it reacts with oxygen,’ he says. He notes that although the stabilised QOOH is different to what forms in low temperature combustion, the knowledge can cross over.

The rate constants the Sandia team were able to measure were even more important than the observation of QOOH, Osborn argues. Previously combustion models had assumed that addition of oxygen to R radicals and QOOH radicals had the same rate constant, but the latter’s is actually ten times larger. ‘Hopefully now they’ll make a correction,’ says Osborn.