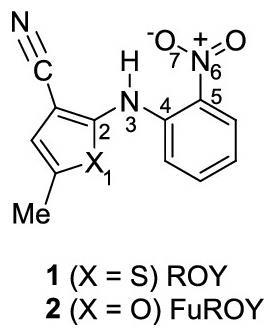 Structures of Roy and its molecular cousin FuRoy

A compound nicknamed Roy (red–orange–yellow) has – again – claimed the record as the molecule with the most polymorphs, now 10 in total.

Roy, or 5-methyl-2-[(2-nitrophenyl)-amino]thiophene-3-carbonitrile, is a precursor to the antipsychotic drug olanzapine and named after its colourful crystal forms. For decades, it has been a favourite of crystallographers as it has more than four polymorphs – one of only 0.001% of compounds among the million in the Cambridge Structural Database to have this property.

Although polymorphs have the same chemical composition, they differ in their physical properties – melting point, colour, density – and their bioavailability. This makes choosing the right polymorph important for drug and agrochemical manufacturers. Chemists have hypothesised, supported by computational analysis, that most compounds are polymorphic. But exploring this property is difficult as crystallisation is somewhat of a dark art. Even seemingly simple compounds like sodium ethoxide can prove exceedingly hard to crystallise.

In 2019, Roy was pushed off its polymorphic throne by rival aripiprazole and its nine crystal structures, one more than Roy at the time. Now, two new Roy polymorphs have now been discovered using crystal seeding with a molecular mimic, a compound that differs in only one atom.

The molecular mimic created by a team from Canada is called FuRoy. It contains an oxygen where Roy has a sulfur atom. Adding a small Roy–FuRoy mixed crystal to a supercooled Roy droplet, or a supercooled suspension in water respectively, yielded two new Roy polymorphs. This brings Roy’s total number of polymorphs up to 10 by the team’s count – a new record. This figure has now reached 11 with another well-characterised polymorph reported recently. However, if you include polymorphs that have not been well characterised the number can rise to anything between 14 and 16.

The researchers suggest that mixed crystal seeding with a molecular mimic could be used to find polymorphs of many other compounds.

Correction: The number of Roy polymorphs that have been discovered has clarified