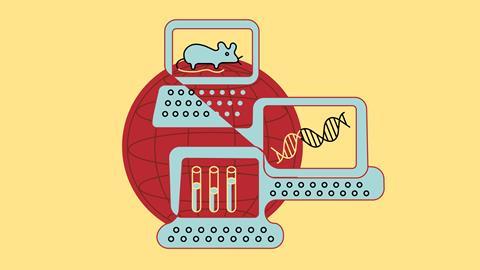 Hopes for a new wave of toxicity tests that avoid the use of animals were raised at the end of June. For the first time the Organisation for Economic Co-operation and Development (OECD) approved a non-animal method for checking skin sensitisation.

‘I am convinced that the testing strategy on skin sensitisation is a vanguard of new approaches to gain toxicological information without animal testing in the future,’ says Robert Landsiedel from BASF, who developed the test in collaboration with Givaudan.

Almost 40,000 animals were used in skin sensitisation tests in the EU and Norway in 2018 out of a total of 10.5 million animals used in research. Now, many of these could be replaced by the new test. This was only possible due to a deep understanding of the biological processes at work and then replicating those through a series of in vitro assays.

‘Skin sensitisation is a complex process involving different cell types, tissues and processes. When we started 15 years ago, nothing of this complex process had been addressed by non-animal methods,’ says Landsiedel.

In 2014, the OECD published an adverse outcome pathway for skin sensitisation, which defines the sequence of events from exposure to a chemical through to an immune response. BASF partnered with other organisations to show that a combination of three tests using peptides, immune cells and skin cells could identify the risk of these events, eventually leading to OECD approval.

Keeping up with the times

A 2010 EU directive called for a transition away from animals in research. While there have been reductions in the number of animals used in research in the EU and the US, it is not clear how or if it could end entirely. In a world where advancing technologies and supply chain disruptions can change the landscape quickly, regulation and long-held practices will need to adapt.

Toxicity testing is tightly regulated to reduce the risks of new substances causing harm in settings that range from clinical trials to pesticides in waterways. ‘A lot of the regulatory testing has been based on tests and guidelines that were developed decades ago,’ says Sewell. ‘That might have been the valid scientific thinking at the time, but actually we’ve moved on from there.’ 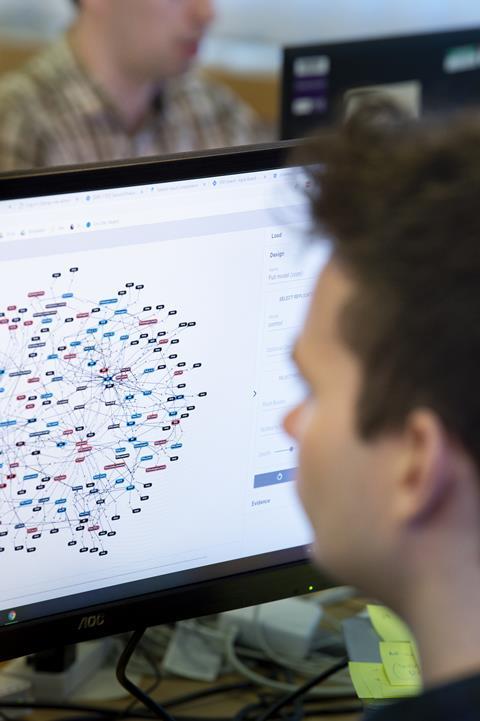 One successful example that she gives of updating guidelines is acute toxicity testing in animals. Evidence collected by the NC3Rs showed that these tests provided no additional value. The information could be gathered from other existing studies and so it was dropped from the regulatory guidance.

Although new technologies are generally not able to directly replace an existing animal test, they can still help to reduce the number of animals required. Computational methods can help to predict toxicological effects. Quantitative structure–activity relationship analysis predicts biological or toxicological properties based on the physicochemical and structural properties of chemicals. In addition, chemists can ‘read across’ or infer toxicity from similar chemicals that already have a lot of toxicology data.

‘We’re getting better at weeding out those products or drugs that are less likely to be successful [and] identifying those safety concerns early on,’ says Sewell. While these tests are already being used in-house for screening, she says that ‘there needs to be a leap to get those used in a regulatory context’.

The EU Reach legislation introduced new safety testing on a large number of chemicals used within the bloc – without this data chemicals would no longer be allowed to be sold. Although animal tests are required to be used only as a last resort, there are no non-animal tests available for many checks. ‘There’s a huge number of chemicals that needed to be tested through Reach, so it does mean that huge numbers of animals do have to be used,’ says Sewell. However, according to a 2020 report by the European Chemicals Agency, the use of non-animal methods like read-across tripled since 2016 for areas such as skin corrosion and eye damage.

Only about a fifth of research animals in the EU are used for regulatory testing, however. Instead, the majority are used for basic research, making them much harder to replace. ‘[For] aspects of drug development and toxicology, the replacement of animals is generally technically simpler because the tests are very highly regulated and clearly defined,’ says Malcolm France, a veterinary consultant based in Sydney and former president of the Australian and New Zealand Laboratory Animal Association. ‘It’s a completely different story trying to replace animals when you are exploring bigger questions, seeking new knowledge about how the body works and how disease processes work.’ 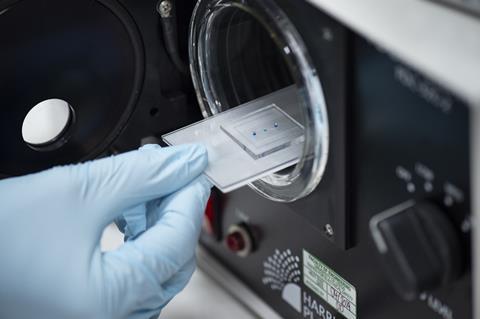 However, the number of animals used in the EU, the US and Great Britain has fallen in recent years. This is likely to be due to a combination of tightening regulation and advances in technology. The biggest change to animal research over the last two decades has been the rise of genetic modification. These approaches, used primarily in mice, have offered scientists the ability to replicate diseases and biological pathways in humans more closely.

The result was a significant increase in the total number of animals being used in research. Early techniques required many generations of mice, each time producing a large litter, to insert the genetic change required.

In Great Britain, which keeps detailed records on the number of genetically modified animals created, breeding accounts for about half of the total animal procedures. An increase in this breeding drove most of the rise in animal procedures in Great Britain up to 2013. However, due to advances in gene-editing technology, the breeding numbers have fallen despite research using transgenic animals remaining steady.

The number of procedures using animals in Great Britain fell particularly steeply in 2020, no doubt due to the disruption to research caused by the Covid-19 pandemic. This is likely to be replicated around the world as more statistics are published. Although this may have been a one-off, there could be long-term repercussions.

China was one of the world’s largest exporters of non-human primates (NHPs), particularly cynomolgus macaques, but the country banned exports in spring 2020 as Covid-19 spread. These monkeys are often used in regulatory testing of candidate drugs before starting clinical trials.

Most drugs must be tested in two mammalian species, one rodent and one non-rodent, typically a monkey. However, there is already some flexibility built into this system. Biologics, such as monoclonal antibodies, should only be tested in ‘pharmacologically relevant species’ as toxicity is generally driven by exaggerated pharmacology or immunogenicity. This frequently means biologics are only tested in a single monkey species as their immune response is similar to humans’.

‘We might be forced into having to look at how we reduce the use of non-human primates because the supply might not be there,’ says Sewell. ‘From my perspective, that’s an opportunity to think more carefully about the use of NHPs and looking at where we can use alternatives [such as] transgenic mice instead.’ 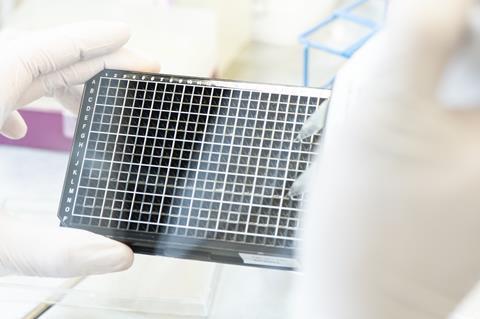 A 96-well plate used for 3D cell culture. This culturing technique allows cells to grow in all dimensions creating a more realistic test bed for environmental chemicals and drugs

The export ban could exacerbate existing supply problems experienced by scientists. A 2018 report by the National Institutes of Health in the US found that half of researchers had had problems obtaining NHPs or related services, which had delayed or hurt their research. In particular, funding awards that boosted research into HIV/Aids led to a surge in demand for rhesus macaques in 2016, creating shortages that lasted for years afterwards. The NIH has since introduced an expert panel to prioritise requests for NHPs from their facilities based on the urgency and timeline for public health impact.

Managing the supply of monkeys is a big challenge as they need a couple of years to develop and longer to breed. Efforts to expand breeding programmes would mean that female monkeys would need to be held back at facilities, increasing pressure on supply in the short-term.

Even for mice, however, supply is not guaranteed. In Australia, the largest supplier of mice and rats used in biomedical research recently announced that it was to close. The Animal Resource Centre based in Perth emailed its customers in July, stating that it was not financially viable and would wind down operations over the next 12–18 months.

‘Being by far the largest supplier, it has created deep concern amongst many of Australia’s universities and medical research institutes,’ says France. He adds that the sector has ‘been left scrambling to try and bring together a sort of coordinated national response’.

France sees this as a chance to improve animal research in Australia rather than replicating the centre, which was set up over 30 years ago. The centre supplies most of its animals to institutes on the other side of the country, which can be a four-hour flight. Basing a new centre in the east ‘would not only simplify the logistics, but it would remove that significant animal welfare consideration that arises when animals are being transported long distances by air’, he says.

Advances in cryopreservation, he adds, could improve the balance of supply and demand to reduce the number of animals bred that are unused. ‘For strains of mouse or rat that are used infrequently, rather than keep them as live colonies, we freeze the embryos and just revive them.’

Between the ethics, cost and reliability questions, there are a lot of motivating factors for researchers to reduce their reliance on animal tests. As trust builds in the effectiveness of alternative tests, it may not take long for more to follow the skin sensitisation test.

For the scientific community to trust new methods, Sewell says, it will want to know how they compare to animal models. ‘But we don’t want to fall into the trap of trying to just get the same result as the animals because those models don’t always give us a good picture of the event in humans,’ she adds.

However, the current systems of regulation are designed around the use of animals, says Landsiedel. ‘We should look at a system for risk assessment and chemical regulation which is accommodating data obtained from non-animal methods and existing toxicological data,’ he says. ‘If we do it right, it will also provide more accurate data and data which are more relevant for human risk assessment.’