Computational chemist Alán Aspuru-Guzik has had to close down his lab and send his team of more than 30 researchers home since the University of Toronto in Canada cancelled all in-person classes in mid-March. He also pivoted his work to focus on fighting Covid-19, and hopes that scientists around the world will do the same. 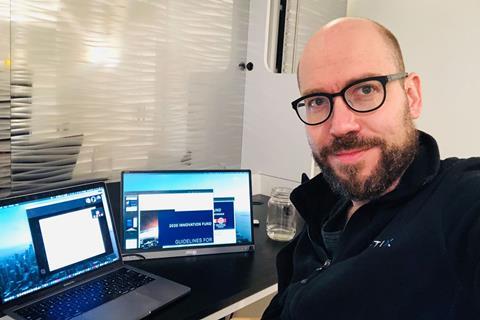 Many people assume that it’s easy for computational chemists to work remotely, but Aspuru-Guzik insists that lab closures are just as difficult for them as for experimental chemists. ‘Computational chemists are not in a normal state, nobody is in a normal state … Yes, we can do some of our research remotely, [but] it is kind of a sad way of doing science and not the most productive,’ he says.

The members of his multidisciplinary research group – which also includes physicists, engineers and computer scientists – are using online platforms to meet virtually. But Aspuru-Guzik says these tools are poor proxies for lab interaction. ‘They try to approximate, but they do not offer the same experience.’

Meanwhile, the large experimental component of his lab has is completely on hold. ‘We have robots that do chemistry, and of course that has stopped,’ he tells Chemistry World. ‘It is not set up for remote access – you have to feed the machine with chemicals, you have to calibrate it, you have to build new pieces.’

Pivoting for a pandemic

Still, his team continues to work, and rather than using the downtime to catch up on manuscripts and other tasks, that work now focuses on Covid-19. ‘The people who say they are reflecting and thriving, I respect their decision,’ he says, ‘but I choose to fight this war.’

Aspuru-Guzik is collaborating with Kansas State University researchers to discover molecules that can inhibit a receptor on Sars-CoV-2 that comprises the ‘production machinery’ of the virus. So far, they have identified about 2000 candidate molecules for the receptor, and are now selecting a small subset of these to synthesise and test. But the closures are hampering the process.

‘We have identified a few lead candidates, and now we have to run them by the medicinal chemists, and then in order for us to synthesise them we have to ask the University of Toronto to give us access to our lab again,’ Aspuru-Guzik explains.

He is also leading an initiative to develop a contact tracing smartphone app called My Trace. The technology is based on Safe Paths, a free, open source digital platform from the Massachusetts Institute of Technology. The app tracks users’ movements and the data is anonymised and released by the Canadian health authorities. Individual users can receive risk assessments that alert them if they were recently near somebody who tested positive for the virus. ‘We are in daily discussions with the local authorities about potentially launching this application very soon – hopefully, in a matter of days or weeks,’ says Aspuru-Guzik.

Despite being locked out of the lab, Aspuru-Guzik says he is working more than ever. ‘For some of us, the only way to cope with this to just work very hard to attack this head-on with whatever tools that we have,’ he explains.

And he also looks after his mental and physical health by running about 60km a week. Although most things are closed in Toronto, including the parks, people are allowed outside so he recently completed a half marathon in his neighbourhood. ‘I pretty much run in the middle of the street, so that people on the sidewalks feel comfortable,’ he says. He is able to do that because there is so little traffic in Toronto right now. Although, he’s not entirely alone – his dog and his seven-year-old son accompanied him for portions of his half-marathon stint.

Both of his sons are taking online classes because schools are closed. He is also playing chess with them and teaching his older son to code. The nine-year-old just built a programme that simulates Covid-19 spread and concurrent hospital capacity. He adds that he loves being together with his children and wife, whom he credits with keeping the household together right now.

Being at home has also given him the chance to think about how he spends his time. Last year, a third of his time was spent travelling, and he doesn’t miss it. ‘You go because of this social pressure, and you are the keynote speaker or the invited speaker at a particular session, and your friends are going to be there,’ he explains. ‘Then you fly back and you’re exhausted.’ Once this crisis is over, he intends to do the least amount of work travel possible.