An autonomous DNA molecular machine has been created that can be programmed to assemble a variety of natural and synthetic molecular building blocks into longer chains. The work boosts the prospect of making libraries of new synthetic polymeric materials by mimicking how ribosomes, the biomachinery inside cells, assemble proteins – a feat that could pave the way for smart materials and new drugs. 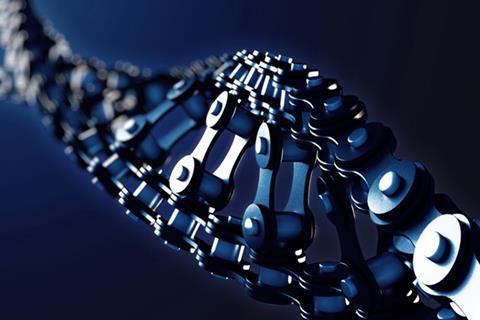 The ribosome mimic consists of two DNA pieces – a ‘chemistry’ and an ‘instruction’ sequence – that, when brought together, self-assemble and synthesise a pre-programmed oligomer

Sequence-controlled oligomer synthesis using synthetic ribosome-like molecular machines has been achieved before. In 2013, Bartosz Lewandowski and co-workers in David Leigh’s group demonstrated an autonomous synthetic molecular assembler – a rotaxane ring that moves down a molecular track picking up building blocks and placing them in sequence. And David Liu’s group at Harvard University, US, has developed DNA-template systems that perform similar functions. However, these and other approaches tend to require an external signal to initiate each new reaction and often only make one end product at a time.

Now, researchers have devised a DNA-based molecular assembler that simply requires a set of programmable DNA instructions and a single initiator molecule to begin bond-forming reactions that produce either one or a variety of oligomers in a one-pot reaction. It’s currently proof-of-concept but Andrew Turberfield, whose group at the University of Oxford, UK, conducted the study together with Rachel O’Reilly’s group at the University of Warwick, says it has ’great potential’.

Lewandowski, now at the Swiss Federal Institute of Technology in Zurich, says it’s ‘unprecedented’ to be able to program the system for combinatorial assembly of several different sequences. ‘It presents another important step forward in the development of synthetic molecular machines inspired by the ribosome and capable of performing programmed, sequence-specific synthesis of oligomers.’

The team used hairpin-shaped DNA strands which were classed as either ‘chemistry’ or ‘instruction’ sequences. The chemistry hairpins were attached to individual reactants – olefin or peptide building blocks – which were all mixed up together. The instruction hairpins were programmed – based on their DNA sequence – to control the order in which monomers assemble. When the instruction hairpins and an initiator molecule were mixed with the chemistry hairpins, the DNA strands self-assembled and hybridised which brought the reactants into close proximity and coordinated bond formation – either olefin or peptide – between reactants in the desired sequences to produce different oligomers between three and seven units long.

What’s more, each oligomer remains tagged to a strand of DNA which contains a record of bond formation sequence in its code. This meant the team could know the precise structure of each oligomer product – which is essential information when screening libraries of oligomers for functional molecules – by using PCR amplification and by then sequencing the DNA.

‘The orchestration of DNA hybridisation changes while the “assembler” is operating is beautiful and ingenious, and the end-products appear to be quite strictly governed by the input programs,’ says Liu. ‘This is one of the most impressive examples of autonomous, programmable organic synthesis to date.’