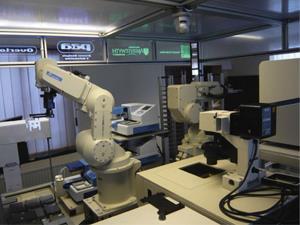 An artificial intelligence system – or ‘robot scientist’ – capable of screening potential drugs almost completely independently could speed up drug development, say the UK researchers who created it. The approach has already identified some promising leads, including an anti-cancer compound which also shows anti-malarial properties.

The robot scientist – named ‘Eve’ – is actually a collection of machines including several computers hooked up to the kind of automated instruments already found in many labs. ‘The idea is to automate scientific research,’ says lead author Ross King from the University of Manchester. ‘You tell the system about the area of research you’re interested in … and then the computer has an automated way of forming novel hypotheses about that area of science. It can then design experiments to test these hypotheses and the lab robots go ahead and actually do the experiments.’ The computer can also interpret the results, modify its hypotheses and construct new tests completely autonomously, only needing occasional human assistance to top up reagents and remove waste.

Eve’s predecessor – Adam – carried out genetic experiments in yeast and became the first robotic system to independently make a scientific discovery. ‘What we wanted to do with Eve was apply the same approach to something with more immediate societal values,’ says King. Eve was designed specifically for drug development and the team initially chose to focus on neglected tropical diseases.

Many parts of the process, such as high throughput library screening, are already highly automated, and Eve is kitted out with all the necessary equipment to screen tens of thousands of compounds a day and identify leads. But the system can also intelligently respond to results and create standardised assays using synthetic biology. Once it has identified a lead compound, Eve can engineer specific strains of yeast needed to screen for activity against a particular disease. This makes it both quicker and cheaper than standard drug screening methods, even those that already use automated equipment.

The system already has proven successes, highlighting several drug candidates that could be ‘repurposed’. For example, it showed the anti-cancer compound TNP-470 can also attack the malarial parasite Plasmodium vivax by inhibiting an essential enzyme. This compound is now being looked at in Brazil, where this form of malaria is prevalent.

‘It was surprising to me how easy it was to find interesting compounds for these diseases,’ says King. ‘When I started this I assumed that the main focus of the research would be proof-of-principle.’

Andrey Rzhetsky, a geneticist and computational scientist at the University of Chicago, US, who was not involved in the study, praised the group’s work. ‘I am definitely a believer in this direction of AI [artificial intelligence] work,’ he comments.

In future, King says, robot scientists like Eve could be used by pharmaceutical companies to streamline the drug development process, or explore potential new functions for existing drugs. ‘We found some really interesting compounds,’ he says, ‘And there are even more exciting results that we have yet to report.’