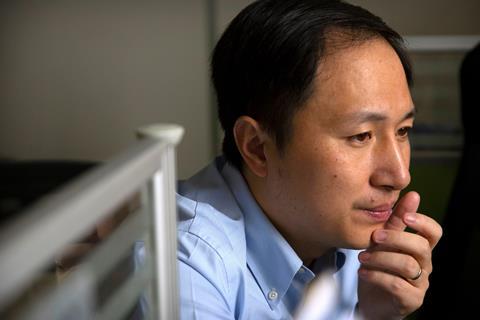 He Jiankui was sentenced to three years in prison for illegal medical practice, after creating the world’s first gene-edited babies

He Jiankui, the Chinese researcher who claimed to have created the world’s first gene-edited children, has been sentenced to three years in prison and fined Yuan3 million (£327,000) by a Chinese court. According to the official state Chinese news agency Xinhua, the former associate professor at the Southern University of Science and Technology was convicted of illegal medical practice.

The Nanshan District People’s Court of Shenzhen in south China found that He and two of his colleagues had knowingly violated the country’s regulations and ethical principles to practice gene-editing in reproductive medicine. It said their acts were ‘in the pursuit of personal fame and gain’ and have seriously ‘disrupted medical order’.

The three researchers, who pleaded guilty, have been banned for life from participating in reproductive medicine and research, Xinhua reports. Zhang Renli and Qin Jinzhou from two medical institutes in Guangdong Province received jail terms of two years and 18 months, respectively, as well as fines.

He, a biophysicist trained at Rice University and Stanford and the US, announced the birth of twin girls who had undergone gene-editing at a conference in November 2018. He had used Crispr–Cas9 technology to edit their DNA as embryos, reportedly to prevent them from contracting HIV. He chose to edit the CCR5 gene. A particular mutation in this gene deletes a portion of DNA that appears to make the bearer resistant to certain viruses including HIV. The father of the twins was HIV positive. The existence of a third gene-edited baby has also now been confirmed.

He’s claims caused considerable consternation in the academic community. Researchers called for independent verification, and complained the work was unethical and failed to conform to international norms. The Chinese authorities launched an investigation.

The court appears to have acted appropriately, said Robin Lovell-Badge, group leader at the Francis Crick Institute. ‘[He] could not have carried out all the technical aspects of the work alone. The teams involved were probably larger than this, but others may not have known the details.’

‘The choice of CCR5 as the gene to edit, when we do not know enough about its normal role, and the purpose, which was for social rather than clinical reasons, were very concerning,’ said Lovell-Badge. ‘It is far too premature for anyone to attempt clinical application of germline genome editing; indeed, at this stage we do not know if the methods will ever be sufficiently safe and efficient – although the relevant science is progressing rapidly, and new methods can look promising.’ He also noted that there are still many details of the case that have yet to be released, such as confirmation of the edits made to the CCR5 gene and whether or not there were also edits made elsewhere in the genome.

‘By common consensus, He Jiankui’s interventions went well beyond what was ethically acceptable,’ said Julian Hitchcock a lawyer specialising in regulation of human genome editing at Bristows. ‘[However] whether he had broken a law, and if so which law, was unclear, and these questions became more urgent when he was “vanished”, presumably by the Chinese state. News of the court’s treatment of the case therefore appears to be something of a relief. Nevertheless, the court’s verdict of “guilty of illegal practice” implies a wide margin of discretion by a court that is hardly independent of government, and will not inspire confidence.’

Two reports on the practicality and ethics of human genome editing are due later this year. One from the World Health Organization and the other from the International Commission on the Clinical Use of Human Germline Genome Editing organised by the US National Academies of Science, Engineering and Medicine.