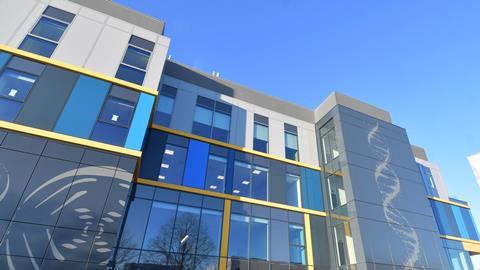 Researchers from the Rosalind Franklin Institute hit the headlines last month when they announced that a unique type of antibody produced by llamas could provide a new treatment against Covid-19 as a simple nasal spray. The institute, which focuses on tackling the most pressing health challenges, has now opened the doors to its new £43 million home within the Rutherford Appleton Laboratory at the Harwell campus near Oxford.

The new hub will provide ‘world class’ laboratory space for disruptive technologies aimed at speeding up discovery of new medicines and diagnostics, advances in microbial and plant science, and a deeper understanding of human health and disease.

The idea is to connect physical sciences and engineering to the life sciences. The institute’s director, James Naismith, believes it will provide ‘factor-of-ten’ advances in life science innovations, which will allow researchers to see the biological world in new ways – from picometre-scale atoms to centimetre-scale tumours.

The Franklin, with its goal of probing the fundamental mechanisms in biology, will be complementary to the genetics research carried out at the Sanger Centre and cell biology work at the Crick Institute. It is supported by the Engineering and Physical Sciences Research Council, while the Crick and Sanger are backed by the Medical Research Council.

The Franklin was set up by 10 universities, the Science and Technology Facilities Council and the Diamond Light Source in 2018 with £103 million in funding from the government. The new building will operate as the central hub with the other institutions acting as the ‘spokes’. 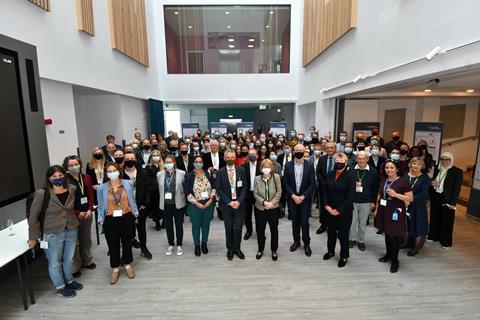 Staff at the official opening of the Rosalind Franklin Institute

‘Our goal is to probe the fundamental natural mechanisms in biology through chemical approaches,’ explains Ben Davis, science director of the next generation chemistry theme and professor of chemistry at the University of Oxford. ‘The most fascinating organic chemistry takes place at the intersection with biology.’

One of the key principles under investigation is gene editing, Davis says. ‘Can we develop bond-forming and bond-breaking mediated approaches within living systems – the ability to do chemistry in biology? This would allow us to ‘see life’, and unravel pathways and mechanisms when things go wrong.’

Research has continued throughout the pandemic and Davis is particularly proud of two advances. The first involved work with Wilfred van der Donk at the University of Illinois at Urbana–Champaign, US, and Shabaz Mohammed at Oxford on new methods to chemically edit kinases, the enzymes that catalyse the transfer of phosphate groups to other molecules such as proteins and sugars. The second, again in collaboration with Mohammed, as well as Veronique Gouverneur and Andrew Baldwin, also both at Oxford, involved light-driven manufacture of carbon–carbon bonds in proteins, which potentially means researchers could change the structure of protein side-chains.

The research that happens at the Franklin is not work that would carried out at universities, Davis adds. ‘We are good at picking projects that are novel, stuff which is really a large step ahead. We have an advantage over universities, where there are often artificial divisions between departments which can hold up advances. But these do not exist at the Franklin so we can be quicker to jump at a problem from five or 10 different angles.’

The opening of the building also marks the start of the Franklin’s new PhD training programme. Ten junior researchers will spend four years working with universities and industry across the UK. They will undertake a unique interdisciplinary first year delivered with the University of Edinburgh and complete a 12-week exploratory research study, before co-designing a full PhD project. ‘The programme has a very different flavour to others out there,’ says Davis. ‘It focuses on teaching the skills needed for cutting-edge research, and students come from a wide variety of backgrounds from biology to maths.’