Fluorination steps are increasingly prevalent in organic chemistry, particularly when synthesising drug molecules. However, the toxicity of hydrofluoric acid – the most readily available fluoride reagent – can cause issues.

The automated flow system devised by Thomas Wirth of Cardiff University, and co-workers, works on a range of hypervalent-iodine mediated fluorination reactions using a variety of substrates. The reactions proceed via transient (difluoroiodo)arene intermediates, which react immediately when the substrate is added to the flow system to form the fluorinated products. By injecting an aqueous base after the reaction, the reaction is quenched and phase separation allows an easy isolation of the product.

‘The pumps, the electrochemical reactor, the product collection, the automated wash, are all computer controlled. There is no manual interaction with the chemistry, which is all contained in the flow system within a fume cupboard,’ says Wirth. ‘This is a very interesting aspect for all chemistry using both hazardous and non-hazardous reagents, and can facilitate and automate standard procedures such as work-ups.’ 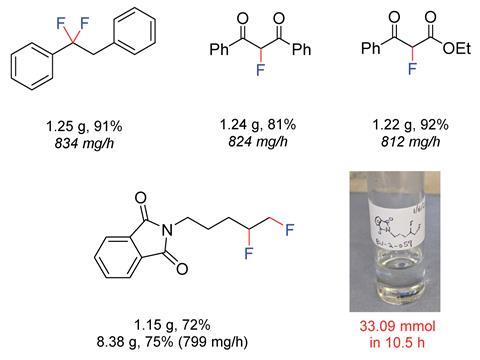 The flow reactions proved to be more efficient than those carried out in batch, with similar or increased yields for most substrates, and a significantly shorter reaction time. ‘Being able to add the substrate directly after generating an intermediate reagent allows you to transform substrates and carry out reactions that you can’t do in batch. We have achieved new chemistry, and used this methodology to access molecules we couldn’t make before,’ comments Wirth. ‘This technique, of generating a short-lived reaction intermediate in flow before adding the substrate, is known, but we have now applied it to fluorination chemistry.’

Given the shortened reaction times, focus on safety and the increasing importance of late-stage fluorination reactions in pharmaceutical chemistry, this process could prove to be valuable in an industrial setting. So far, the process has been carried out on an 8g scale, with no decrease in yield.

‘The transfer of electrochemical batch reactions into flow is a really important step to achieve wide-spread use of that reaction, especially in process chemistry contexts. Hence, the transfer of fluorination reactions that use HF reagents into flow will facilitate their ability to be scaled up,’ comments Alastair Lennox, a synthetic electrochemistry expert at the University of Bristol, UK. ‘However, actually demonstrating the higher scales, using less expensive electrode materials and higher concentrations is still needed to prove their viability for industrial implementation.’