While many sticking points remain, these should not be allowed to derail changes to the publication of research in the UK, meeting told 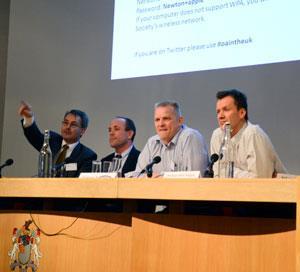 Arguments over fine detail should not derail moves towards open access (OA) publishing for scientific research, according to those with the biggest stake in future changes. Meeting at a debate held at the Royal Society in London, UK, on 25 February, all parties agreed that progress will only be made if everyone can be persuaded to cooperate for the common good.

Representatives from government, funding bodies, publishers, libraries and researchers all gathered to discuss the challenges of implementing a significant change in the way the UK’s scientific research is published. This meeting follows a sea change in UK government policy on the publication of scientific research. Publically funded research is now required to be freely available online, rather than behind publishers’ journal subscription paywalls.

However, making that transition presents something of an obstacle course. There are costs to be met, infrastructure to put in place and mechanisms to be agreed. While such debates are important, David Sweeney from the Higher Education Funding Council of England (Hefce) described the ‘ferment of debate’ as including significant amounts of ‘friendly fire’ – disagreements between partners with broadly the same goals over fine details. ‘We wish to move on,’ Sweeney said, ‘but we can only do that if we all want to participate.’  With this in mind, Hefce has launched a wide-ranging consultation on how to integrate OA requirements into its Research Excellence Framework (REF) assessment programme following the 2014 REF.

Even when there is money available to pay for gold OA publications, I have received no requests for it

While this mood was echoed by many of the speakers, it is clear that the challenges faced by various stakeholders are different but interlinked. One of the biggest stumbling blocks is funding. UK government policy states a preference for the ‘gold’ OA route, whereby researchers, or their funder or institution, pay a fee for an article to be made freely available by the publisher of their chosen journal. However, the policy indicates the ‘green’ OA route is acceptable in the short term. In this case, a copy of the article is deposited in an online repository and made available after an embargo period agreed with the publisher. 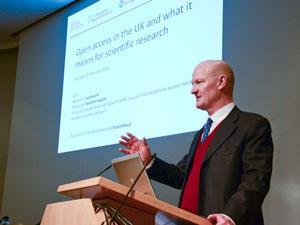 One source of concern is the potential misalignment of UK policy with the rest of the world in its focus on the gold OA model. Last year, the European commission announced that it expects all outputs funded by its Horizon 2020 programme to be made open access, but stated no real preference as to achieve this. On the other hand, the White House Office of Science and Technology Policy in the US, issued a mandate to the country’s funding bodies to make the research they fund publically available. However, that mandate focuses very clearly on green OA, with no extra funding for gold.

But to David Willetts, the UK’s universities and science minister, the situation is clear. ‘In the long term, gold OA achieves the objective of universal, immediate access to research unambiguously, while honestly recognising that there are costs associated with publishing,’ he said at the meeting. While he acknowledged that we cannot afford to switch universally to gold straightaway, and that there will be a mixed gold and green OA economy for many years to come, he asserted that the government’s view is that, in the long term, green OA is unsustainable.

When questioned about the potential risks and rewards of taking such an aggressive stance in favour of gold OA, Willetts stressed that moving first provides ‘a mark in the ground’ and allows the UK to influence the debate in other arenas.

But gold OA requires extra funding, particularly during a transition period in which institutions will still need to subscribe to traditional journals, but also pay processing charges for their own research. Research Councils UK (RCUK), the umbrella body for government research funders, has committed to supplying some of this funding through block grants to major UK institutions.

However, RCUK was chastised last week by the House of Lords Science and Technology Committee for failing to effectively communicate its policy on how that funding should be used. While RCUK has a strong preference for gold OA, its original policy was unclear as to the conditions under which a green OA route was acceptable. While the original policy appeared very restrictive, RCUK has since indicated that it will take a more relaxed approach over a five year transition period, with regular progress reviews. ‘We see this very much as a journey, not an event,’ said Tony Peatfield, speaking on behalf of RCUK at the meeting.

From the perspective of individual academics, however, there is an even bigger problem. Tom Welton, head of chemistry at Imperial College London, pointed out that many UK academics, particularly chemists, have little or no interest in the OA debate. ‘Even when there is money available to pay for gold OA publications, I have received no requests for it.’

He suggested that there is a perception that paying for publication will induce publishers to be less scrupulous in their peer review processes – regardless of whether this is actually true. He also pointed out that adding even minimal administrative burdens for OA would discourage researchers, unless they can be convinced that it is in their interest.

University of Liverpool librarian Phil Sykes suggested one solution to this problem. He says that library staff would be ideally placed to take on the administration of OA, since they are often responsible for curating institutional repositories, are used to negotiating with publishers and are familiar with copyright requirements. ‘The caravan of public attention will eventually move on,’ he says, ‘when it does, it will be up to librarians to keep the pressure on to make sure the expensively acquired results of research are free to access.’