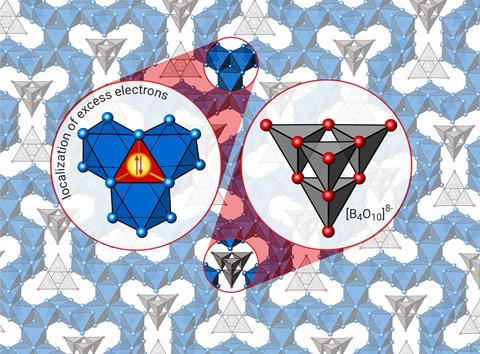 Ag16B4O10 has a rather unusual structure

Chemists in Germany have isolated a silver-rich oxide with an electron count in conflict with its physical properties.1 The team has rationalised its observations by attributing them to an unusual bonding scenario featuring an extra stabilising interaction between silver atoms.

Martin Jansen’s group at the Max Planck Institute for Solid State Research has been making oxides with a high silver content. One of which is Ag16B4O10, which they formed using high oxygen pressure and carefully controlled temperatures in a solid-state reaction. On defining its properties and structure using conductivity and magnetic susceptibility measurements, x-ray diffraction and theoretical calculations they encountered a few surprises.

Its discoverers pose that silver tetrahedra trap the paired electrons in bonding molecular orbitals, preventing free movement and conductivity. The synergy between these trapped electrons and conventional covalent, ionic and closed-shell d10–d10 bonding stabilises Ag16B4O10 in air, even at ambient conditions – a feature that might surprise chemists who generally associate exotic bonding features with fragile and explosive compounds. ‘Spontaneous formation of such a solid bearing an excess of electrons while applying distinctly oxidising conditions underpins the remarkable stability of such a configuration,’ comments Jansen.

‘Materials like this challenge our preconceptions,’ comments Paul Attfield an expert in materials science under extreme conditions at the University of Edinburgh, UK. ‘It’s unlikely that anyone would have predicted this composition, so it underlines the importance of careful synthetic exploration and occasional good luck!’

Jansen previously predicted that subvalent structures are accessible in silver-rich oxide materials but few example compounds have been prepared.2 ‘Preparing the material resembles a tightrope walk – the small window of conditions allowing formation of such a subvalent silver oxide is not predictable and has to be explored empirically,’ he adds.

To develop this phenomenon into a textbook bonding scheme, chemists need to make more of these metal-rich oxide compounds. Jansen hopes that others will be ‘encouraged to intensify work in this direction, in particular since the subtleties of electron localisation may give rise to interesting physical properties.’