Hypervalent bonding controversy out for the electron count? 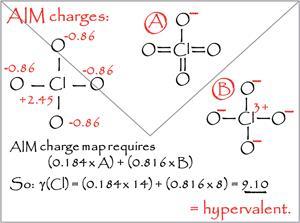 Durrant has proposed a simple but quantitative measure of hypervalency

A researcher in the UK has presented a controversial new definition for hypervalency that may ignite debates over atomic charge and allow students to draw nitrogen atoms with five covalent bonds.

Marcus Durrant from the University of Northumbria describes his account of hypervalency as going back to the drawing board. By bringing together electron counts on atoms in different resonance structures, he presents a valence electron equivalent parameter to indicate an overall number of electrons associated with each atom. A count greater than eight defines hypervalency.

Traditionally, hypervalency describes any atom that breaks the octet rule by bonding to more neighbouring atoms than its valence electrons should allow. Sulfur dioxide (O=S=O) is hypervalent because the sulfur atom has more than eight valence electrons associated with it. In contrast, its oxygen analogue ozone (O=O+–O–) is not because second-row elements were thought to be unable to expand their octet by mixing in higher orbitals, and is instead taught to be drawn with a formal charge.

Experience teaching this to undergraduates laid the foundations for Durrant’s reassessment of bonding. Why teach that it is correct to draw neutral sulfur dioxide with more bonds than the s- and p-orbitals of the central sulfur atom allow when it is only acceptable to draw ozone with single bonds and charges? Durrant puts this down to tradition, to account for exceptions to Lewis’ 1916 description of chemical bonds. But how should we teach diazomethane (CH2N2)? An octet-compliant model (H2C––N+=N) places a negative charge on the carbon atom, but this doesn’t reflect its reactivity.

Quantum chemists have shown that it is energetically unfeasible to use d-orbitals for extra bonds, undermining a quantum mechanical account of Lewis bonding. The bonds in sulfur dioxide are instead very polar, giving the sulfur atom a formal 2+ charge and an overall share of electrons less than eight – no longer hypervalent.

The parameter for hypervalency proposed by Durrant is an expression of the idea that many molecular structures have several resonance forms with a true structure between the extremes. Each resonance structure assigns a number of electrons to each atom, and so the true electron count on each atom should depend on the proportional contribution of each resonance form. If the atomic charges can be determined, an overall electron distribution can be calculated.

Lewis structures, Durrant notes, are fundamentally ‘making predictions about charges on atoms’ so a measurement of atomic charges would also verify or further undermine the Lewis model we teach. But there is long-standing contention regarding atomic charges. Various theoretical approaches, including natural bond orbital (NBO), Hirshfeld and Mulliken models, have been used to calculate atomic charges, but results vary wildly.

This is a nice example of how teaching interacts with research

Instead, Durrant chose to use atomic charges based on Richard Bader’s Quantum Theory of Atoms in Molecules (QTAIM). As well as being a theoretical model, some argue they are also obtainable from observations. This could help move the hypervalency debate forward from difficult interpretation of calculated bond orders to arguments based on experiment. Whilst controversial, Durrant notes that QTAIM charges correlate well with electronegativity. The question is: what is the logic of this connection? 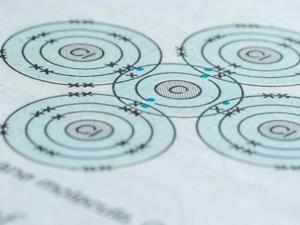 Simple Lewis bonding models may once again have quantum underpinning

Matthias Bickelhaupt, a theoretical chemist at VU University Amsterdam, cautions that this approach ‘should not be mistaken as a physical model with explanatory or predictive power.’ He argues that the lack of a straightforward relationship between Durrant’s parameter, bond energy and molecular geometry limits this description of hypervalency to ‘an indicator that one can use in phenomenological classifications of compounds.’

Indeed, the atomic charges determined by QTAIM do not agree with those calculated by the Hirshfeld or Mulliken models. At worst, Durrant’s parameter is based on an inaccurate physical model. But there is good agreement with calculated NBO charges, and the possibility of experimental validation. An alternative interpretation, therefore, is that it is the Hirshfeld and Mulliken models that are inaccurate.

Durrant asserts that the corroboration between QTAIM experimental observations and NBO charges by his independent parameter lends support to his definition of hypervalency. This would also be a return to quantum mechanical support for Lewis bonding. Potentially more intriguing is the introduction of a tool to test the validity of atomic charge models using experimental observations.

‘For me this is a nice example of how teaching interacts with research where you not only teach things but question yourself what you are teaching,’ adds Durrant. He stresses that current teaching on hypervalency is still a useful rule of thumb, obeyed by most molecules. But ‘we should stop bashing students for drawing nitro [–NO2] groups with five bonds,’ as this is not wrong, but part of the overall picture.

Durrant is now interested in the possibility of predicting hypervalent species that might exist in known reactions. The debate is likely to continue.