Scientists in Germany have isolated a disilicon hydride radical for the first time. 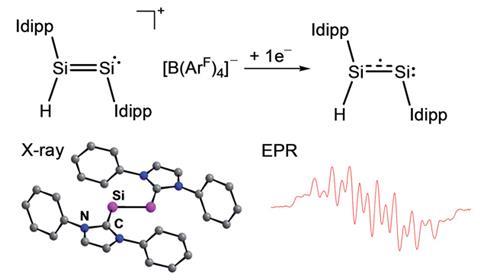 Open-shell silicon hydrides exist as transient species during chemical vapour deposition of silicon, a key process when making semiconductors for products such as solar cells. These compounds are very unstable and as a result are difficult to detect, let alone isolate.

Alexander Filippou and colleagues at the University of Bonn have now managed to trap a mixed-valent disilicon hydride radical between two N-heterocyclic carbenes. Theoretical and experimental investigations show that the unusual molecular fragment features a terminal silicon–hydrogen bond and asymmetric spin density across the silicon atoms. The compound, which contains one silicon atom in the +1 oxidation state and the other in the 0 state, is remarkable as examples of isolated hydrides of silicon in oxidation states lower than +2 are very rare and open-shell congeners have never previously been reported.

Following a one-electron reduction of a hydridodisilicon salt with potassium graphite the disilicon hydride radical was isolated as a dark green crystalline material that is stable at room temperature.