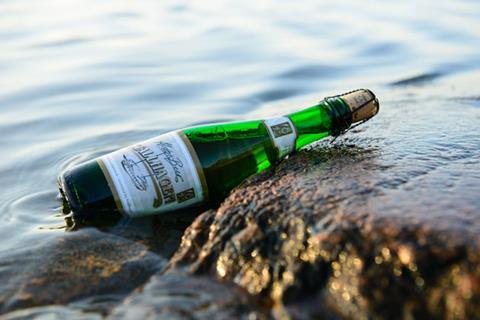 Researchers in Finland and Germany have analysed samples of 170-year-old beer recovered from a shipwreck in a bid to discover more about how the beverage, and the process of making it, has changed through the ages. And using some of the results, a Finnish brewery has attempted to recreate the original beer, producing ‘1843’ ale, named after the year the ship is thought to have sunk.

‘To our knowledge this is the oldest beer that has been chemically analysed in this way,’ explains team member Brian Gibson, who studies yeast fermentation at the VTT Technical Research Centre of Finland. The samples came from corked glass bottles found on the wreck of a schooner that was discovered in 2010 in the Baltic Sea, just south of the Åland Islands of the coast of Finland. Not a lot is known about what happened to the ship, but the beers probably belonged to 19th century merchants. As well as five bottles of beer, divers also found more than 150 bottles of champagne on board.

The team used high-performance liquid chromatography and gas chromatography-mass spectroscopy to analyse various components, including alcohol, acids, sugars and the products of fermentation in the beer samples. They also made the same measurements in six modern beers for comparison.

The historical beer was a golden yellow colour, and foamed with what the researchers presumed to be carbon dioxide gas when the bottles were first uncorked. It smelled like ‘autolysed yeast, dimethyl sulfide, Bakelite, burnt rubber, over-ripe cheese and goat, with phenolic and sulfury notes’, the researchers noted.

The presence of chemical derivatives of hops, along with characteristic flavour compounds and maltose sugars confirmed the bottles held beer. At around 3% ABV, the historical drink was less alcoholic than modern beers, and was also found to be slightly more acidic.

Unsurprisingly, 170 years under the sea took its toll on the beers, and the researchers reported some ‘deterioration in quality’ caused by enzymes and microorganisms. This is predictable, says Charles Bamforth, an expert in brewing science at the University of California Davis, US. ‘A modern beer of regular strength will have a flavour life of about three to four months,’ he says. ‘These beers show all the signs of extensive aging. The values reported are consistent with huge degradation.’ He also points out that the beers have become diluted with sea water. ‘The sodium to potassium ratio is the inverse of what you get in fresh modern beers,’ he explains.

But despite the degradation, says Gibson, the analysis can still give us some insight into what beer was like, and how it was made, over a century ago. ‘There are certainly things we can learn – the hop analysis was quite extensive,’ he says. ‘We know from the kind of hop components there that the wort would have been boiled – instead of having alpha acids we have iso-alpha acids which are indicative of boiling.’ 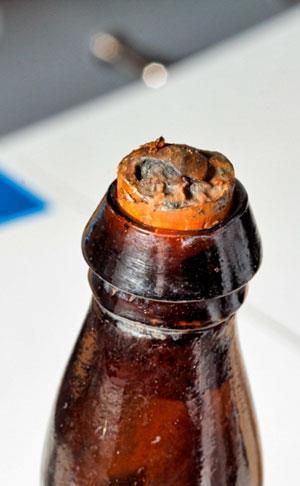 Some spoilage occured during the beer's long underwater confinement

The presence of glucose, which would normally be consumed early on in the fermentation process, suggests the beers were deliberately sweetened after brewing. However, Gibson and his colleagues weren’t able to find out much about the yeast that was used to brew the beer, as they did not recover any surviving yeast cells or DNA from the bottles. They did, however, find dead yeast cells which they examined under a microscope.

‘We could, to some extent, say a little bit about yeast species based on the [cell] shape,’ says Gibson. ‘We can say there were possibly some wild yeasts that look a little bit different to “normal” [Saccharomyces cerevisiae] yeast, but it’s not conclusive.’

One of the project’s original aims was to try and recreate the beer, and fortunately the team were able to produce enough data for the Stallhagen brewery, based on the Åland Islands, to give it a try – albeit with a bit of guesswork and some artistic license. Like those found on the wreck, bottles of ‘1843’ are sealed with a cork – rather like a champagne bottle – and a different strain of yeast was used to make it.

‘It was nice to see our little bit of research ending up on the shelves in supermarkets,’ Gibson says. The taste, he adds, is ‘quite nice. It’s a mild ale – quite complex, fruity flavours. I would say it’s quite different to modern beers. I’ve never tasted anything like it.’