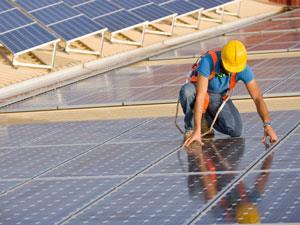 A cheap chemical used to make bath salts and tofu looks to be the solution to cutting a toxic cadmium compound from a promising type of solar cell. Magnesium chloride can be used in place of poisonous cadmium chloride in thin film solar cells without the need to change the fabrication process. As well as reducing this kind of solar cell’s environmental impact, this substitution will make the cells much cheaper without compromising on performance.

Thin film solar cells can employ a number of materials but one of the principal technologies features cadmium telluride and cadmium sulfide. The two materials are sandwiched together on a substrate along with transparent electrodes. Cadmium telluride is a p-type semiconductor that mostly carries positively charged holes, while the n-type semiconductor cadmium sulfide carries electrons. During fabrication of thin film cells they need to be activated with cadmium chloride – without this activation step efficiencies rarely rise above 2%. However, cadmium chloride is also a source of highly toxic cadmium ions, unlike cadmium telluride and sulfide, which are relatively inert.

The UK team from the University of Liverpool made their discovery by testing a range of chlorides in thin film solar cells. Of the four cheap and non-toxic chlorides that they identified only magnesium chloride led to solar cells with the same or better efficiency as those treated with cadmium chloride. These cells reached peak efficiencies of more than 13%, putting them on a par with some solar cells on the market. They hope that their work will help drive down the cost of thin film solar modules, which currently cost under $1(60p) per watt to manufacture.

The researchers discovered that, while magnesium chloride introduced small amounts of chlorine impurities to activate or dope the semiconductors, they don’t add metal ions that damage the cells’ performance, unlike sodium, potassium and manganese chlorides. The scientists theorise that as magnesium ions have the same oxidation state as cadmium ones they act in a similar way and don’t foul the solar cell.

‘The reason silicon [in solar cells] has a problem is that it’s made from large wafers,’ explained author Jon Major at the Euroscience Open Forum in Copenhagen, Denmark. ‘Despite what you might think silicon doesn’t actually absorb sunlight particularly well. So, to get a decent amount of absorption you have to use 200µm of silicon.’ By contrast thin film solar cells only need a 2µm layer of cadmium telluride, which should make them cheaper once production is scaled up.

Jacek Jasieniak, a solar cell researcher at CSIRO, Australia, says that the Liverpool team have taken an ‘exciting step’ towards cutting thin film solar’s costs. However, he adds: ‘The use of magnesium chloride may have a direct and near future impact on the cost of cadmium telluride solar cells, but the long term cost increases of tellurium will likely overshadow these benefits at the current cadmium telluride thickness.’ He warns that unless cadmium telluride levels are cut further, silicon will remain the dominant technology for the foreseeable future.

Corrections: On 1 July the story was amended to clarify the passage on semiconductors. The figure on the cost of manufacturing thin film solar cells was corrected as it was incorrectly linked to the cost of power generation.