Material designed to get thicker as it bends

Scientists in the Netherlands have designed a material that offers to lengthen the lifetime of hip implants using an unprecedented property: the material gets thicker when compressed and when stretched. 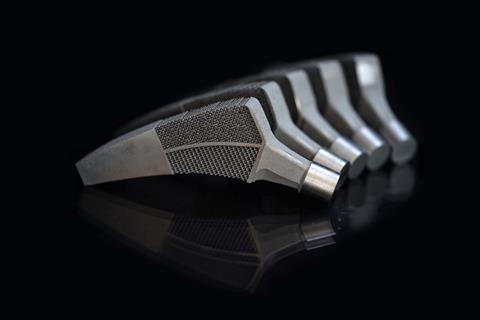 The average owner of an artificial hip is no lazy bones. Each year, they take around four million steps. All this movement takes its toll, though. After around 15 years, implants tend to work loose from the femur bone and need replacing.

To tackle this uncomfortable problem, a team led by Amir Zadpoor, at Delft University of Technology, has designed an implant material that remains snug within the joint. This might sound like a straightforward goal, but to achieve it requires some clever stretching.

Most materials, from metal girders to pizza dough, tend to keep their volume constant when deformed. In other words, when compressed, they expand sideways; when stretched, they thin. Described in terms of Poisson’s ratio, which relates lateral to axial strain, such materials all have a positive value. This is good for pizza, but a sore point for artificial hips. Hip implants must curve slightly within the femur to correctly position the leg and pelvis. Standing and walking compress the inner side of the implant’s curve and stretch the outer side. With a positive Poisson’s ratio, all current implants thin on their stretched side, pulling on adjacent bone and putting it under tension. This is what loosens implants and typically leads to their failure.

Zadpoor’s team have solved this long standing problem by building an implant that has a positive Poisson’s ratio on the side that gets compressed – nothing new there – but a negative ratio on the side that gets stretched. As a result, the implant behaves like no other can: it expands to compress bone on both sides as it bends. With no tension, the implant should last much longer. 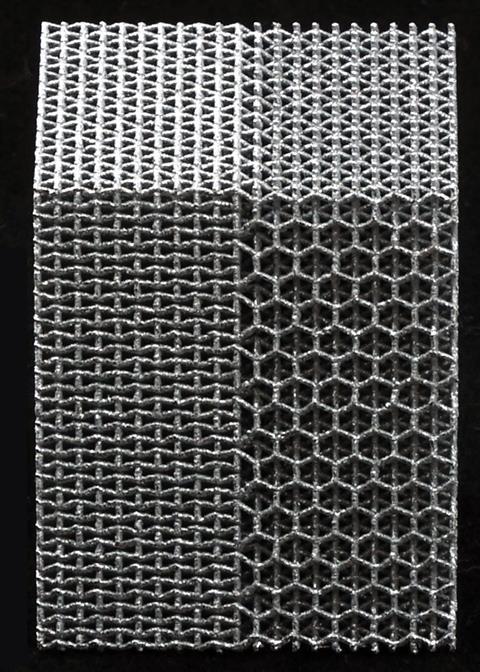 ‘The Poisson’s ratio is something that you can design in the material’s microstructure,’ explains Eline Kolken, who developed the implant with Zadpoor. ‘We chose two types [of microstructure]: a conventional honeycomb, which has a positive Poisson’s ratio; and an inverted honeycomb, which has a negative Poisson’s ratio.’ These two designs are then built into the material, one on either side of the implant, using a process known as additive manufacturing to selectively melt layers of titanium alloy into the desired pattern.

The team have so far built only prototype implants, but Zachary Nicolaou, an expert in negative Poisson’s ratio materials, at Northwestern University in the US praises the work and says the material offers ‘extraordinary properties that are not available in conventional materials … more advances are sure to follow.’ Zadpoor adds that ‘comparable technology would have a wide range of applications in healthcare, such as in surgical instruments, external prosthetics or exosuits.’ He’s already thinking about what could be around the next bend.