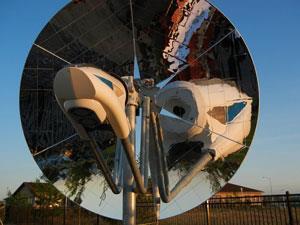 US researchers are developing a system that could boost the efficiency of gas-fired power plants while reducing their greenhouse emissions. The device use solar energy to convert methane into more energy rich syngas, thereby allowing power plants to use around 20% less natural gas to produce the same amount of electricity.

The team at the Department of Energy’s Pacific Northwest National Laboratory (PNNL), first developed a prototype system in 2011, which yielded a conversion efficiency of solar to chemical energy in excess of 60%. Now, they are tweaking the system with the hope of rolling it out on a commercial scale to retrofit existing plants.

The system uses a methane steam-reforming process by employing a mirrored parabolic dish that concentrates solar energy towards a compact 4ft by 2ft device. This contains a reactor, microchannel heat exchangers, controls, sensors and insulation.

The solar concentrator produces high temperatures that drives the reaction of steam and methane flowing inside the microchannels into syngas – a mixture of carbon monoxide and hydrogen. A rhodium catalyst reduces the activation energy and speeds up this reaction.

‘Our system uses highly efficient microchannel heat exchangers to efficiently recuperate heat from the product stream, using it to preheat the reactants,’ says Bob Wegeng, who leads the project. ‘This allows the solar energy to be used preferentially to drive the chemical reaction that produces syngas and provides an overall process that is highly efficient.’

‘The combination of solar reforming with microchannel heat exchangers might be a novel approach,’ comments Aldo Steinfeld who investigates renewable energy at the Swiss Federal Institute of Technology, Zurich. ‘The efficiency is a good indicator of the performance of the solar reactor and has a direct impact on the economics of the process. It is great that they are developing new, more efficient systems.’

‘We believe that we can probably get the system efficiency up to 70%, perhaps to 74–75%,’ Wegeng says. The team’s goal is to produce electricity with their solar powered steam reformer that costs no more than 6 cents/kilowatt hour. ‘This will make the hybrid solar–natural gas power plant economically competitive with conventional power plants.’

Because all elements of the system are modular and mass producible, Wegeng expects implementation and retrofitting of existing power plants to be straightforward in areas that receive reasonable amounts of direct sunlight. He also envisages further applications including for manufacturing facilities that combust natural gas in order to produce process heat, and processing facilities that utilise syngas for other purposes, such as the production of synthetic transportation fuels.