Spaces can be useful

Truly functional MOFs are on the horizon but Susumu Kitagawa saw their potential when they were weak and idle. Clare Sansom caught up with him at the 24th Congress of the International Union of Crystallography in Hyderabad this August 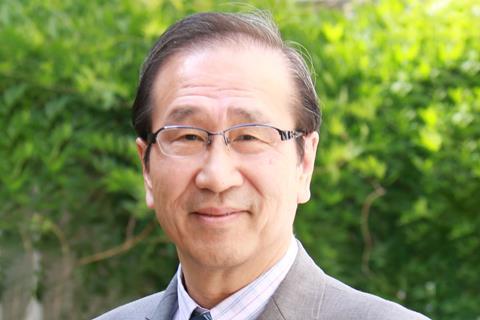 A broad undergraduate curriculum can have many advantages, even for those who go on to achieve scientific success. Susumu Kitagawa, professor of chemistry at Kyoto University, Japan, director of the Institute for Integrated Cell-Material Sciences (iCeMS) there and a pioneering researcher into the structure and properties of porous nanoscale materials, benefited from such a curriculum as an undergraduate at Kyoto University in the 1970s. This included history and European languages as well as fundamental science, but it was an introduction to philosophy that may have influenced his future research career. He studied the writings of a fourth century BC Chinese philosopher, Chuang Tzu, who discussed the idea of the ‘usefulness of the useless’. ‘Spaces may be thought of as useless, but they can actually be very useful,’ he explains. ‘The spaces between molecules in the porous metal–organic frameworks (MOFs) that my group studies have many useful applications.’

Apart from a single year at Texas A&M University, US, Kitagawa spent the whole of his long career in Japan. He graduated from Kyoto with a PhD in hydrocarbon chemistry in 1979 and later worked at the private Kindai University in Osaka and at Tokyo Metropolitan University; he was appointed as a professor at his alma mater in 1998 and has remained there ever since. And his studies at Kyoto brought him more inspiration than just an introduction to ancient philosophers. ‘As an undergraduate, I was privileged to work in the lab of Teijiro Yonezawa who worked for Kenichi Fukui, who later became the first Asian scientist to be awarded the Nobel Prize for Chemistry [in 1981, with Roald Hoffman],’ he says. 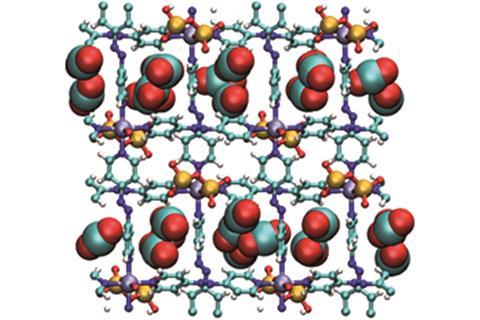 For some, at least, our century is an age of gas. The first energy-hungry technologies, developed in the 19th century, used solid coal as a fuel, and later ones relied on liquid petroleum. Now, with petroleum reserves depleting, and the need to rapidly reduce carbon dioxide emissions being almost universally recognised, gaseous fuels are coming into their own. Gases, however, are difficult to handle and store: they are usually invisible, they disperse and form mixtures very quickly, and many are toxic. Forcing them into states in which they can be more easily handled requires harsh temperatures and pressures that can consume more energy than using the gas will save. They can, however, be safely stored in the pores of MOFs.

These complex molecules have regular framework structures that many chemists see as beautiful; Kyoto University describes them as ‘jungle gym-like’ on their website. ‘MOFs can be thought of ordered assemblies of molecular building blocks on the nanoscale,’ says Kitagawa. ‘Coordination bonds formed with the metal ions that are incorporated into their framework add stability to it: frameworks having weak coordination bonds tend to be much more fragile, so a strong bond is key to forming a robust porous structure.’ MOFs many potential uses include storing and transporting explosive gases such as acetylene, which is widely used as a fuel and in organic synthesis. ‘Without this protective storage, acetylene is transported as a mixture with an organic solvent (solution) and can, in a worst-case scenario, explode powerfully enough to completely destroy the vehicle it was in,’ he adds.

Spaces may be thought of as useless, but they can actually be very useful

During his long career, Kitagawa has seen – and made significant contributions to – developing three generations of MOFs with increasingly complex structures and useful properties; a review he contributed to in 2004 is still the most cited paper in Angewandte Chemie International Edition [7,232 citations by October 2017]. First-generation MOFs were fragile enough to fall apart when the guest molecules that they held, such as solvent, were removed. Second- and third- generation compounds retain their porosity when emptied and also combine some of the properties of organic solids, such as softness, with others like crystallinity that are more characteristic of metals. 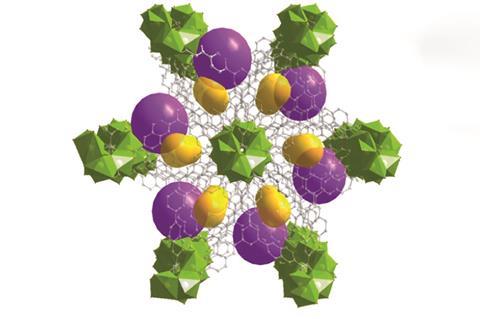 A porous coordination polymer, made by Kitagawa’s team, that can separate carbon dioxide from a four-gas mixture (CO2–N2–O2–CO) at ambient temperature2

The many uses of these versatile compounds have not yet been fully exploited. For example, separation by distillation uses a surprisingly large proportion of the world’s chemical and energy resources. A Nature commentary in April 2016 described seven chemical separation processes, including the removal of carbon dioxide from gaseous emissions, where efficiency gains could ‘reap global benefits’; MOFs – particularly, perhaps, the novel ‘fourth generation’ compounds that are currently being developed – can play an important part in making these improvements. ‘Achieving many of the UN’s Sustainable Development Goals will depend on these processes, and MOFs can play a key role in this,’ adds Kitagawa.

Kitagawa has received several prestigious awards this year: the 58th Fujihara Award from the Japan-based Fujihara Foundation of Science, and then, in October, the Chemistry for the Future Solvay Prize. And he has no plans to retire; he holds three separate research positions, one of which, as distinguished professor at Kyoto University, sets no official retirement age. Young chemists, however, will find plenty of work in this fascinating field long after he has handed the baton on to the next generation.