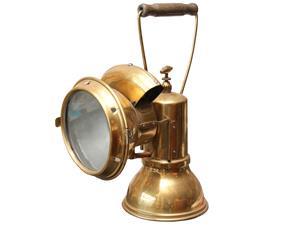 This week, things get hot, and not as Brian Clegg expected…

When I read about them in my youth, there seemed something magical in the description of the acetylene or carbide lamps that were used on early motor vehicles. The idea that adding water to the lamp started a process that could generate a flame seemed wonderfully counter-intuitive.

The reaction that produced the acetylene in these old lamps was between water and calcium carbide powder. As water dripped down, often from an elegant brass container, the unusually structured calcium carbide, which has a triple bond between its pair of carbon atoms, reacts to produce calcium hydroxide and acetylene. More properly ethyne, acetylene retains that unusual triple bond in its C2H2 structure, and is highly flammable. 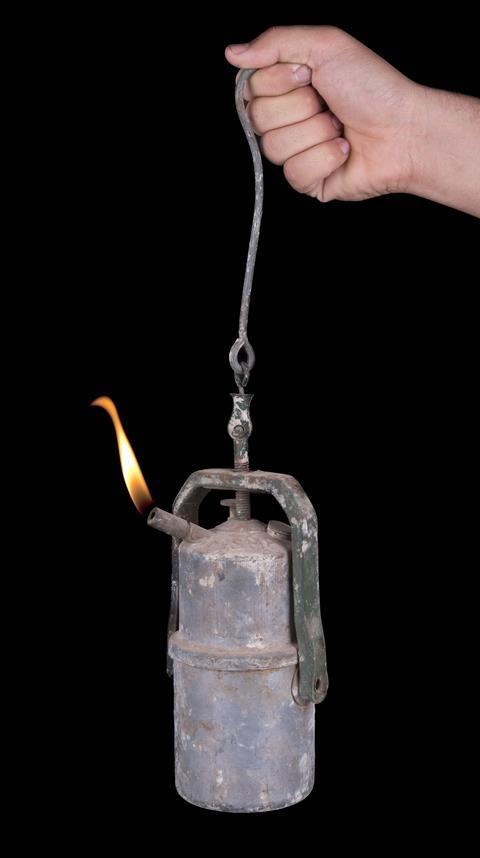 Edmund Davy (who was Humphrey Davy’s cousin) reported his discovery of acetylene at the sixth meeting of the British Association for the Advancement of Science in 1836. He noted that ‘in attempting to procure potassium by strongly heating a mixture of calcined tartar and charcoal in a large iron bottle obtained a black substance, which readily decomposed water, and yielded a gas which, on examination, proved to be a new compound of carbon and hydrogen.’ Davy described the new gas as ‘bicarburet of hydrogen’, but didn’t quite get the composition right, assuming it to be in the form C2H. He also noted acetylene’s dramatic spontaneous combustion with chlorine, commenting that ‘instant explosion takes place, accompanied by a large red flame.’ The gas was rediscovered and more accurately analysed in 1860 by French chemist Marcellin Berthelot who came up with the name acetylene.

Berthelot produced acetylene both by applying heat to organic compounds and by electro-chemical means, but industrially, the gas is mostly produced from the cracking process used to break down large hydrocarbons in oil refineries, and by the partial combustion of methane. In this pure form, the gas has what the US National Institute for Occupational Safety and Health describes rather beautifully as a ‘faint, ethereal odour’, though particularly when obtained from calcium carbide, which often has impurities, it tends to have a strong, unpleasant garlicky smell from phosphine derivatives, or the unmistakable rotten eggs stench of hydrogen sulphide.

Although acetylene lamps still exist, they have largely been replaced by safer battery power to produce a portable light source. However, acetylene’s bright, hot flame has not lost its appeal and is still regularly used for both cutting and welding in the form of an oxyacetylene torch. The reason that acetylene is used rather than a more conventional fuel gas like propane is its high burning temperature. Where a straightforward propane flame in air can produce around 2,000 degrees Celsius, the mix of acetylene and oxygen used in the cutting and welding gear burns at around 3,500 degrees.

The acetylene cylinders used in the torches are unusual in being first stuffed with a porous material and then about half filled with acetone, in which the acetylene will be partially dissolved. This is because the pressure used with such tanks would make pure acetylene unstable and liable to explode. The risk is sufficiently great that the UK government has a specific set of ‘Acetylene Safety Regulations’ which include the prohibition that no person is to ‘manufacture, use, store, transport, import or sell liquid, solid or compressed gaseous acetylene.’ Oxyacetylene is still widely used for cutting and in welding applications where portability is required, but it has largely been replaced by cheaper electric arc welding where the cabling is not an issue.

Acetylene has also proved a versatile starting point for production of ethene, or ethylene (and hence polyethylene), vinyls and acrylic acid derivatives, though many of these are more likely to be made industrially from the output of a cracking plant. On a smaller scale, the compound has proved to have a number of uses in research. In carbon dating, for instance, carbon from the sample is transformed into acetylene to produce a gas that can be fed into a mass spectrometer. And in its polymer form, polyacetylene, this simple molecule has proved to be an effective semiconductor. Although it has not been used commercially, it was a starting point on the development of the still-widening field of organic semiconductors. 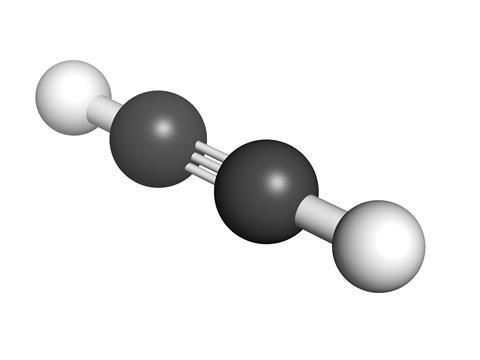 Like a number of other organic compounds, acetylene is found away from the Earth, particularly in the rich and complex atmospheres of gas giant planets like Jupiter. It is also found on at least two moons of Saturn. On Titan, for instance, it has been suggested that ionizing radiation produces highly reactive hydrocarbon radicals or ions that produce acetylene. If this then undergoes catalytic hydrogenation it could be used as an energy source by organisms at or near Titan’s surface, or at the very least could produce amino acids and other molecules essential for life.

There is a rather Victorian feel about acetylene that it just can’t shake off. It has the sound of a substance from the age of gas. But despite a decline in its traditional applications, the versatility of this triple bonded compound, which appears in over half a million academic papers, will ensure that it continues to illuminate experimental chemistry for many years to come.

Science writer Brian Clegg, with the bonding and experimental chemistry of acetylene. Next week, things get sticky.

there are scientists who have spent years studying these simple creatures, scrutinizing their sedentary lifestyle and puzzling over their big secret: how do mussels stay stuck in place? Even with the constant pounding of waves, mussels are able to firmly fix themselves to wet, slippery rocks.

Find out their sticky secret in next week’s Chemistry in its Element. Until then, thank you for listening, I’m Meera Senthilingam.