Researchers in the US have designed and made millimetre-sized motors in the shape of fish that could be produced on an enormous scale and used to purify water.

Nano- and micro-sized machines that convert chemical reactions into motion have been on the drawing board for many years. However, they are complicated and expensive to make. Now, researchers led by Joseph Wang at the University of California San Diego have developed a simple way to print 2D millimetre-sized motors. The motors are shaped like fish, swim autonomously while performing specific functions and avoid the costs and complications of more traditional fabrication processes, such as electrodeposition, sputtering and lithography.

The fish are prepared by depositing different inks layer-by-layer onto a substrate using stainless steel stencils, followed by simple thermal- or photo-curing. Printing each layer separately gave Wang and his co-workers an opportunity to add catalysts into the tails. These catalysts can react with the environment to produce oxygen bubbles that power the fish forward. And magnetic layers added during printing can be used to guide the fish in specific directions.

‘A screen printing fabrication approach represents a departure from traditional approaches as it allows the functionalisation of different sections with different reactive materials,’ says Wang. The millimetre-sized stencils offer control over the shape, size and functionalities of the fish as well as remarkable versatility and low production costs compared to the more expensive and cumbersome methods of producing micro and nanoscale motors. 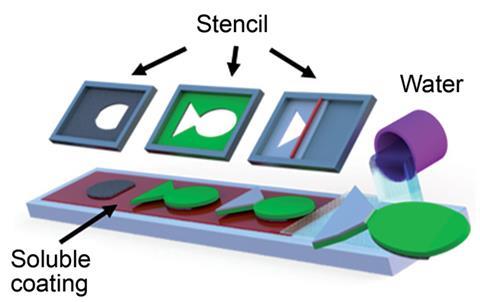 Arben Merkoçi, a nanomaterials expert from the Catalan Institute of Nanotechnology in Spain, says that finding new and effective methods to prepare microscale motors is an interesting research field. ‘Such a large-scale method of fabrication may open the way to extensive research in the field of real application micromotors.’

Amongst the possible applications are ‘remediation fish’, where the motors swim through wastewater and remove contaminants. Their autonomous motion and tiny size mean the fish can efficiently and quickly travel long distances and could therefore shorten wastewater clean-up times.