A study of some of the oldest fossils on Earth suggests life was already diverse around 3.5 billion years ago. Analysis of the stable carbon isotopes of fossilised microbes from Australia suggests some carried out a primitive form of photosynthesis using hydrogen sulfide, while both methane-producing and methane-consuming microbes were also around.

‘Although they are seemingly primitive and obviously early-evolved, they all have complex cells,’ says senior author J. William Schopf, at the University of California, Los Angeles. ‘When life first began it must have had vastly more simple cells and much less complicated chemistry, so life’s origin must have occurred appreciably earlier, perhaps 4 billion years ago.’ 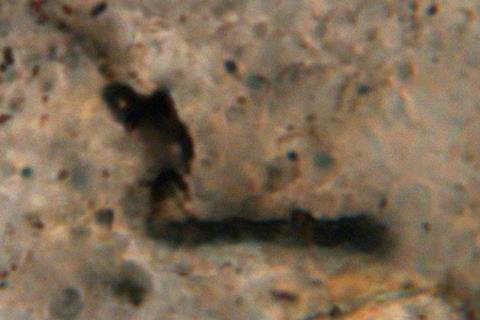 The tiny fossils are thought to be microorganisms that lived on Earth nearly 3.5 billion years ago

‘Measuring the ratios of 12C and 13C in a fossil tells you how they lived and where they fit into the tree of life,’ says Schopf. The ratio of 12C to heavier 13C varies depending on the metabolic processes within different organisms. SIMS produces a measure called delta13C, reported in parts per thousand (‰), where more negative values indicate higher ratios of 13C. In a standard delta13C scale, limestone has a value of around 0‰, photosynthetic bacteria are between -25 and -30‰, methane producers are around -35‰, and methane consumers around -40‰.

Schopf investigated two types of 3.46 billion-year-old fossil microbe: those that were multicellular and shaped like long tubes, and single-celled globular ones. They were found within quartz-rich, fine-grained rock from Pilbara Craton in western Australia, one of only two locations on Earth harbouring pristine crust dating back to the Archean Eon.

‘The findings are consistent with the hypothesis that the Earth in those times lacked all but a trace of free oxygen,’ comments Malcolm Walter, astrobiologist at the University of New South Wales, Australia, who calls the paper ‘an important benchmark in the early history of life’.

‘It is nice to see the application of new chemical techniques to try better understand [the fossils’] origins and history,’ says Alison Olcott Marshall, geochemist at the University of Kansas. She adds that there is some debate within the community over the exact nature of these microfossils. And she warns against making sweeping conclusions on the origins of life based on a single study. ‘The errors produced by SIMS are so large that I fear reliable assignment of microbial taxonomy cannot be made on the basis of one to four measurements,’ she says.