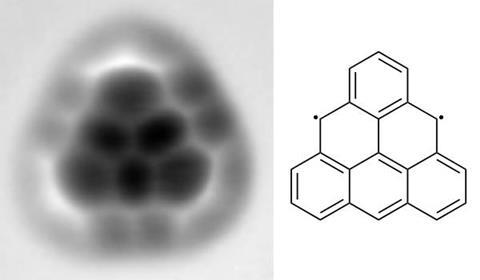 Sixty-four years after it was first hypothesised, researchers have succeeded in making triangulene, a peculiar biradical aromatic that has so far remained elusive because of its extreme reactivity, but could pave the way to quantum computing devices.

Triangulene is planar, cyclic and has 22 π electrons – properties of a fully aromatic molecule according to Hückel’s rule. However, any attempt at drawing its resonance structures results in two unpaired electrons: triangulene is a non-Kekulé aromatic and permanent biradical.

Chemists have been trying to make triangulene through traditional synthesis, but never managed to make unsubstituted triangulene as it has proven to be highly unstable and instantly polymerises or rearranges into more stable structures. Now, Niko Pavliček’s team from IBM Research in Zurich, Switzerland, and the University of Warwick, UK, made triangulene using single atom manipulation – an art IBM researchers have been perfecting since they arranged 35 xenon atoms to spell out ‘IBM’ in 1989.

Pavliček’s team placed a hydrogenated precursor on a copper surface and shocked it into losing two hydrogen atoms and creating triangulene by applying a small voltage with the tip of a combined scanning tunnelling/atomic force microscope. This allowed researchers for the first time to study the biradical’s structure and molecular orbitals in the hope that these types of compounds could one day be used for information storage.