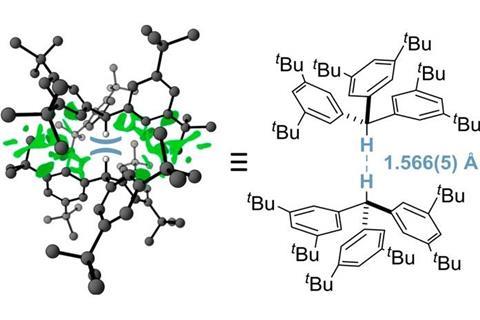 The shortest interaction ever seen between hydrogen atoms bound to neighbouring molecules has been discovered by researchers in Germany.

Chemists routinely draw lines between individual atoms to represent chemical bonds. However, chemical interactions are less static than these solid, dashed or dotted lines might imply – bonds can be twisted, stretched or compressed, depending on the molecules’ geometry.

Now, Peter Schreiner from Justus-Liebig University and his team have discovered the that tri(3,5-tert-butylphenyl)methane crystallises to form the shortest intermolecular hydrogen–hydrogen interaction. Neutron diffraction revealed that the molecule forms dimers, squeezing the central hydrogen distance to only 1.566Å. This H···H distance beats the previous record holder of 32 years2 by 0.051Å.

Schreiner’s discovery is an unusual case as the interaction occurs between hydrogens sitting on adjacent molecules rather than within the same structure – usually, ultra-short H···H distances are only possible in sterically hindered, cage- or bowl-shaped molecules. In tri(3,5-tert-butylphenyl)methane, however, London dispersion forces between the molecules’ 12 tert-butyl groups make this unusual bonding situation possible. London forces are a type of van der Waals forces occurring in bulky non-polar molecules whose large flexible electron clouds spontaneously form short-lived dipoles.