Gecko-inspired adhesive unsticks with a flash of light

Researchers have developed a gecko-inspired dry adhesive system that uses UV light to switch and control its level of stickiness within seconds. The approach is faster and simpler than other photo-controlled adhesives, and could find uses in light-driven robotic systems.

Light responsive materials such as liquid crystal elastomers (LCEs) have been used to make switchable adhesives before. But they are often slow and complicated, needing high temperatures or additional stimuli to activate or return them to their original state. 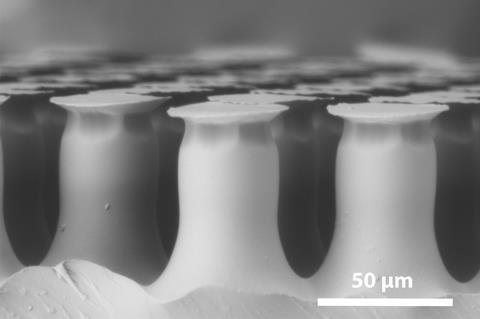 Now, scientists from Kiel University and the University of Bremen in Germany have developed a much simpler and quicker LCE-based adhesive. Their system requires only UV light to switch between sticky and non-sticky states in a matter of seconds, and to control the amount of adhesion. It can also pick up and drop objects; a first for light responsive adhesives according to the team.

Of course, other gecko-inspired adhesives have been developed in recent years, some which perform well enough to enable a person to climb a wall like Spider-Man. But to replicate the speed and grace of a superhero, an adhesive needs to dynamically attach and detach. ‘This was the starting point; we wanted a quick detachment with a reversible adhesive character,’ says Emre Kizilkan, one of the researchers involved.

The material works using a LCE layer sandwiched between two Polydimethylsiloxane (PDMS) layers. One of these layers is covered with tiny mushroom-shaped microstructures that mimic the array of fibres on geckos’ feet that enable them to stick to surfaces via intermolecular van der Waals forces.

To control adhesion, the team used azobenzene in the LCE as the light responsive molecule, which isomerises quickly from one state to another and changes size under UV light. This effect flexes the material enough to cause the microstructures to peel away from a surface and unstick, akin to how a gecko loses adhesion by moving its feet. When the light is removed, the material quickly recovers to its flat, sticky state.

The azobenzene changes shape in response to UV light, causing the adhesive to bend and peel away from a surface

The material can also stick to and transport objects much bigger than the adhesive surface after an initial preload force of 6mN is applied, including glass spheres, microscope slides and plastic Eppendorf tubes. Applying UV light releases the objects. ‘We would like to use this material in a locomoting robot driven by light. Therefore, we plan to optimize the layers’ thicknesses and control the light-induced deformation,’ says Kizilkan.

‘This is an intersting innovation,’ comments Elliot Hawkes from Stanford University in the US, who developed gecko-inspired adhesive gloves 2014. ‘However, I wonder about what the limits on speed are. In many robotic applications, speed of grasp is important,’ he says. ‘A second question is whether adhesion can be achieved without such a large preload. For grasping delicate objects, large preloads can be problematic.’