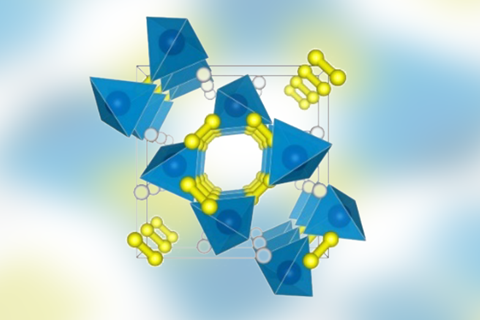 An unprecedented high pressure reaction between ammonia and hydrogen might create a chemical bond never seen before: a hydrogen cation bridging two nitrogen atoms. Nitrogen heptahydride – which is predicted to have the highest hydrogen storage capacity of any material – could even be found on Uranus and Neptune.

‘There is no experimental or theoretical evidence of chemical reactions between ammonia and hydrogen molecules,’ says one of the study’s lead researchers, Quan Li from Jilin University in China. But the team’s calculations have uncovered that the two compounds might indeed react to form nitrogen heptahydride, NH7, at pressures within easy reach of diamond anvil cells – an instrument that can squeeze compounds between the tips of two diamonds at pressures higher than those found at the centre of the Earth.

Li’s team predicts two types of hydride crystals. A lower pressure form exists between 25 and 60GPa. It contains pairs of ammonia molecules with an H+ ion connecting the two nitrogen atoms. The bridging hydrogen forms two covalent bonds, each with a bond order of ½ – it’s a type of bonding entirely new to chemists. The H– counterion is attached to the NH3 units via one of their hydrogen atoms. At higher pressure, the structure converts into another ionic form made of NH4+, H2 and H–. 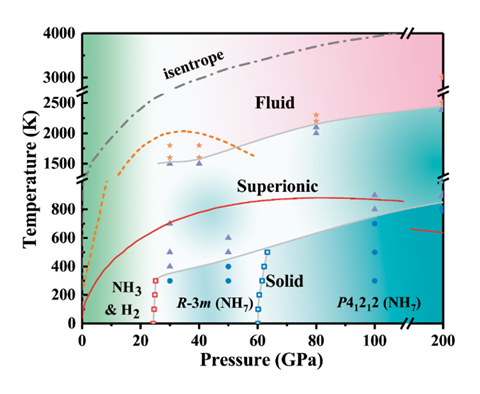 Phase diagram of the formation of NH7 ammonia hydrides

‘Under pressure, chemical interactions are modified, because you’re trying to minimise enthalpy, which is the internal energy plus the pressure volume, not just plain energy,’ explains theoretical chemist Eva Zurek from the State University of New York at Buffalo, US, who is an expert in high pressure systems. ‘You can get these strange systems forming, where you get weird multicentre bonding interaction.’

The heptahydride has other peculiarities. At higher temperatures, it transforms into a superionic form. In this part solid, part liquid material, hydrogen ions float freely around a lattice of crystalline nitrogen ions. Like superionic water, it might be found inside Uranus and Neptune.

‘Since ammonia is expected to be abundant in these planets, studies [like this one] reveal important information on the equation of state of the planetary materials,’ says astrophysicist Ravit Helled, who researches planet formation at the University of Zurich, Switzerland.

‘The compositions and internal structure of Uranus and Neptune remain unknown, and therefore each step forward in high pressure experiments or calculations can provide another piece of the puzzle,’ she adds. Since superionic phases are almost as conductive as metals, they could explain the icy planets’ strange magnetic fields.

Moreover, the hydride might allow scientists to develop better hydrogen storage materials, says Li. ‘From the percentage of mass, the current predicted NH7 has the highest hydrogen storage [33wt%] and releasing [19wt%] capacity among known compounds, including metal–organic frameworks, but not including compressed hydrogen.’

‘It would be interesting for people to try to explore these types of mixtures in the lab, I think it could be done,’ says Zurek. ‘From a lot of the cases I’ve seen recently, of crystal structure prediction being translated into experiment, is that oftentimes the computations have been pretty spot on.’