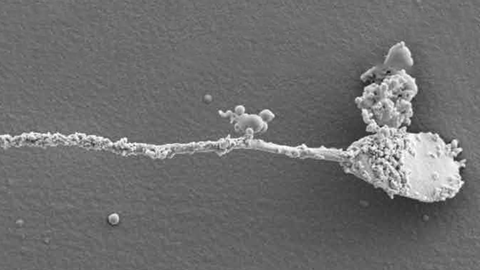 Researchers have created microrobots that swim under the influence of a magnetic field, by coating sperm cells with iron nanoparticles. The spermbots could one day be used to deliver drugs to hard-to-reach areas in the body.

Micro- or nanorobots are systems that can respond to a stimulus with some useful action or function. That could be as simple as making a liposome capsule that releases a chemotherapy drug when heated, explains Simone Schuerle who leads the responsive biomedical systems group at ETH Zurich in Switzerland and wasn’t involved in the work. And what the biomedical microrobot community is really after is a system whose motion can be minutely controlled and that performs one or several functions. 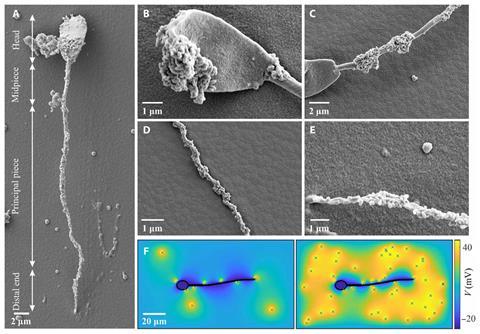 However, ‘translation of microrobotics into in vivo application faces some hurdles’, says Islam Khalil from the University of Twente, Netherlands, who led the iron-sperm study together with Veronika Magdanz, from Germany’s Dresden University of Technology. Creating a moving, controllable system only a few micrometers in size, soft enough to squeeze through tiny blood vessels is already difficult. But it also needs to be biocompatible, easy to make and should be trackable from outside the body.

Magdanz, Khalil and their team tackled many of these problems with their sperm-templated microrobots: bovine sperm cells partially coated with iron oxide nanoparticles. The sperm cells themselves are dead (live ones are simply too wriggly to attach anything to them, Magdanz says), but the metallic coating means they can be controlled magnetically. A weak rotating and oscillating magnetic field causes the tail to move, propelling the sperm forward.

‘The bending stiffness varies over the length of the sperm cell, which is something very unique that you cannot fabricate easily,’ Magdanz explains. Making iron-sperm is simple enough as the positively charged iron oxide particles attach themselves onto the cells’ negatively charged sections, mostly the head and different sections of the tail. The team could even load doxorubicin into the iron-sperm, demonstrating its potential as drug carrier.

‘Preserving the flexibility of a natural structure but having the ability to externally control it is a really nice step forward,’ comments Schuerle. She also points out that the spermbots – but not natural sperm cells – can be detected with ultrasound. ‘This is something very important when we want to go to clinical translation. Can I detect where the system I have injected is and do that in a way that has deep tissue penetration and a very fast imaging rate? Ultrasound ticks those boxes.’

Given that the spermbots are based on a biological structure, they should do well in terms of biocompatibility, says Dong Sun, a biomedical engineer at the City University of Hong Kong. He notes that the researchers have established that iron-sperm doesn’t kill cells cultures. Now, ‘we’ll need to find out whether these sperm cells can be used for example in the brain or in the liver’, says Sun.

Live sperm move up to 10 orders of magnitude faster, says Khalil. ‘But you’re gaining robustness because iron-sperm is insensitive to temperature, insensitive to the chemical gradient in the medium, and its lifetime is unlimited’, he adds. ‘In the future, we are planning to use clusters of them, because they will help each other in moving with bigger thrust force against flowing streams of fluids.’