Non-stick polymer coating is simple to apply and repels oil, water and alcohol

A quick and easy to apply coating can make surfaces oil, alcohol and water repellent. The transparent liquid-like omniphobic coating developed by US scientists could allow for anti-graffiti, anti-staining, self-cleaning surfaces that paint, dirt and grime won’t stick to. 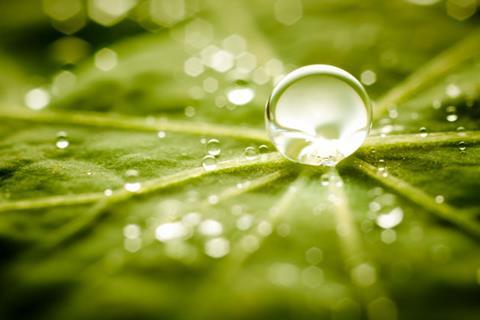 In recent years, several strategies have been attempted to prepare omniphobic surfaces that repel both polar and apolar liquids. However, they are complex owing to the challenge of creating surfaces with ultra-low contact angle hysteresis, which is what causes liquids to bead and easily slide off a surface. One method is to covalently attach flexible groups onto smooth surfaces to create a slippery liquid-like layer. But this approach is usually time-consuming and involves complicated synthetic chemistry.

Now, Liming Wang and Thomas McCarthy at the University of Massachusetts, US, have devised a way to create such smooth and slippery coatings without complex synthetic chemistry and long reaction times. Their method so simple it involves just one step and takes minutes to achieve at room temperature.

‘Even physicists can make this surface! You don’t need the skills of a synthetic chemist,’ says McCarthy. ‘We have previously made comparable surfaces on silicon wafers that require much more difficult chemical procedures.’ The hard work to get to the new method, McCarthy explains, was developing the chemical system.

The duo eventually determined the best option was an isopropanol solution containing dimethyldimethoxysilane – a siloxane monomer – and sulfuric acid. They then dip-coated silicon wafers and glass slides into it. These were dried at room temperature and, upon rinsing with water, isopropanol and toluene, the coating’s omniphobic properties became immediately apparent.

The team found that the coating forms during the drying stage because the acid catalyses the polymerisation of the siloxane monomers into polydimethylsiloxane (PDMS) chains. This creates a liquid-like coating dubbed a SOCAL, which stands for slippery omniphobic covalently attached liquid, on the substrate surface. At room temperature, coatings were ready in under 20 minutes, while at 75ºC the procedure took less than 20 seconds.

Tests revealed that watery and oily liquids roll off of coated slides effortlessly, even when tilted at just a 1° incline. Even hexane was repelled at 1° incline despite having a lower surface tension than that of PDMS, which under normal circumstances would form a flat pool on a surface rather than a spherical droplet. What’s more, after a year in storage the coating’s omniphobic properties remained.

‘The commercial appeal of the fabrication technique lies in its “instant” preparation within a few seconds or minutes,’ comments Arun Kota, who investigates super-repellent surfaces at Colorado State University, US. ‘While the covalent bonding between the grafted molecules and the solid surface may imply good mechanical durability, systematic experiments must be conducted to evaluate the mechanical durability of these surfaces before they can be considered for practical applications such as stain-free displays and anti-fouling coatings.’