Switching an oxygen atom to sulfur within the sugar trehalose prevents it from being metabolised by Clostridium difficile bacteria, inhibiting their growth. Trehalose is widely used as an additive in food, cosmetics and pharmaceuticals, and the modified form retains many of its positive properties.

The 1,1-glycosidic link between the two glucose units that form trehalose makes it very stable. This stability allows trehalose to withstand high temperatures and harsh conditions used in food and cosmetics processing that could cause other sugars to react and break down.

However, researchers recently uncovered a link between infection with the intestinal pathogen Clostridium difficile and trehalose consumption. Two strains of C. difficile, RT027 and RT078, have developed a way to break the sugar down to release glucose using the enzyme trehalase. This has led to an increase in the severity of C. difficile outbreaks as trehalose has become more abundant in human use. 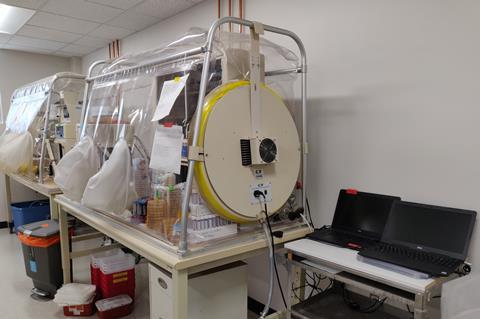 A team led by Noah Danielson and Benjamin Swarts from Central Michigan University, US, and James Collins and Robert Britton from Baylor College of Medicine in Houston, US, have developed modified trehalose structures that the bacteria cannot feed on. ‘We posed that degradation-resistant trehalose analogues would not contribute to C. difficile growth and that the compounds might inhibit metabolism as well,’ explains Swarts.

The team focused on three different variants of trehalose, looking for an analogue that trehalase couldn’t split into glucose. 5-Thiotrehalose, in which the oxygen atom within one of the glucose rings is replaced by sulfur, showed a benefit over the alternatives mannotrehalose and lactotrehalose which have a different stereochemistry of particular hydroxyl groups. Not only was 5-thiotrehalose resistant to being broken down by trehalase, but the virulent C. difficile strains RT027 and RT078 didn’t grow at all when provided with only 5-thiotrehalose. Mannotrehalose and lactotrehalose were both less effective when it came to blocking the pathogen’s growth.

The team focused on three different variants of trehalose, changing stereochemistry as well as the sulfur substitution

‘The link between dietary trehalose and hypervirulent C. difficile needs to be addressed,’ says immunoglycomics expert Bridget Stocker of Victoria University of Wellington, New Zealand, who was not involved in the study. ‘Targeting trehalase to prevent the growth of C. difficile is an exciting proof of concept’.

While Swarts states that 5-thiotrehalose production, through a single enzymatic step, has ‘some bottlenecks to scale-up’, it can be used as an additive alongside trehalose, which should reduce the cost. The analogue can block the growth of RT027 and RT078 in a dose-dependent manner even when trehalose is also available.

However, trehalase is a diverse family of enzymes and activity of the analogues needs testing further. ‘Trehalase is found in the intestinal wall of humans and can be expressed extracellularly by yeast,’ cautions Stocker, ‘it is imperative that 5-thiotrehalose is not a substrate for any of these’.

Swarts’s team is exploring this and other trehalases. ‘Trehalase activity is also important for insects, including mosquitoes, which are vectors for malaria, Zika and West Nile virus,’ adds Swarts.  In addition to microbial and human trehalases, the researchers hope to uncover whether their trehalose analogues may also find use in combating the spread of insect-borne diseases while allowing continued use of trehalose in foods, pharmaceuticals and cosmetics.