Researchers in Singapore and the US have brewed up a green tea-based cancer drug delivery system where both the drug and its carrier fight tumour growth. They’ve encapsulated the antibody Herceptin (trastuzumab) in molecules based on the green tea polyphenol epigallocatechin-3-gallate (EGCG), which has shown anticancer activity, for example helping to kill leukaemia cells. ‘This system has achieved excellent tumour selectivity, prolonged blood half-life and reduced tumour growth,’ says Joo Eun Chung from Singapore’s Institute of Bioengineering and Nanotechnology (IBN).

Studying EGCG’s activity, Chung, Motoichi Kurisawa and their colleagues were struck by its ready binding with biological molecules like proteins. Knowing that it’s safe for human consumption, they wondered if EGCG could solve a problem faced by carrier molecules designed to target drugs at diseased areas.

‘Ideally, the carrier should be cleared from the body after it has delivered the drug to cancer cells,’ Kurisawa explains. ‘If a high quantity of carrier is used, it can lead to problems associated with their toxicity, metabolism and degradability. However, this issue would not be a restricting factor in our system.’

The IBN-led team modified EGCG in two different ways to produce molecules that would form micelles that could wrap up a protein drug like Herceptin. One modification linked together several EGCG molecules to form oligomers that bound more tightly with proteins. The other added polyethylene glycol to EGCG molecules to make hydrophobic tails that would form the outside of the micelle, while the protein was trapped inside. 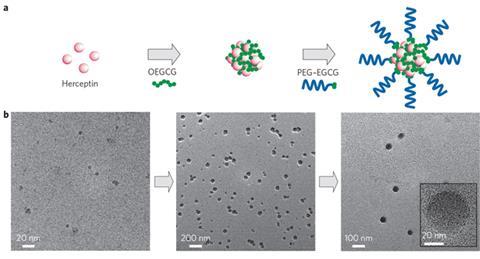 The nanocomplexes are made of EGCG oligomer bound to Herceptin, then surrounded with EGCG tagged with polyethylene glycol

Testing the resulting ‘micellar nanocomplexes’ (MNCs) containing Herceptin in a mouse model of breast cancer, the researchers found they shrunk their tumours, whereas Herceptin alone merely slowed their growth. The MNCs also targeted tumours much more selectively than Herceptin alone. They found more than twice as much drug in the tumours, 30% less in the mice’s liver and kidneys, and 60% less in their lungs.

Marina Resmini, who is researching nanoparticle use in drug delivery at Queen Mary, University of London, calls the work ‘an important achievement’. ‘The data are very convincing and are likely to lead to a new area of work where the delivery systems will have a key role in the therapeutic efficiency of a formulation,’ she says.

Having patented the approach, the IBN researchers are now working to bring it to people. ‘We will work with companies that are interested in co-developing the technology with us,’ Kurisawa says.