Scientists rethink how they use enzymes in chemical synthesis by exerting thermodynamic, rather than kinetic, control 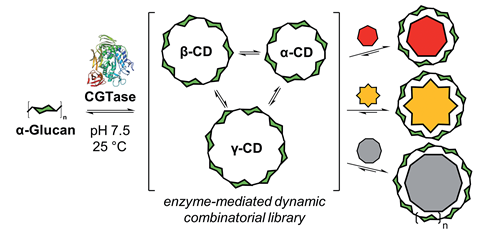 Cyclodextrin glucanotransferase is used to generate a dynamic mixture of cyclodextrins starting from various glucans. Addition of suitable templates induces a change in cyclodextrin distribution

Researchers in Denmark have developed a set of templates to influence the products of an enzyme-mediated system. They used their process to synthesise cyclodextrins with nine and 10 units, which are difficult to access through other methods.

The approach involves enzymatic synthesis of a library of interconverting oligomers, and uses a series of templates to selectively favour different products from the system, including products that are rarely found in nature. ‘The interesting thing about our method is that, without protein engineering or enzyme modification, we have this ability to exert control over an enzyme reaction,’ says Sophie Beeren of the Technical University of Denmark, who led the research. ‘We can just add templates which then give different outcomes from the same reaction.’

Beeren combined her knowledge of enzymes and background in dynamic combinatorial chemistry to develop the concept. Dynamic combinatorial chemistry is a thermodynamically controlled process whereby simple molecules are linked together by reversible reactions to form libraries of complex molecules (dynamic combinatorial libraries). Templates stabilise and favour particular products from the library. By using the enzyme cyclodextrin glycosyltransferase (CGTase) to catalyse the synthesis of cyclodextrins from α-glucan under thermodynamic control, Beeren was able to add artificial templates to favour the unusual δ and ε large ring cyclodextrins. These have nine and 10 glucose units per macrocycle, respectively, and in the absence of Beeren’s templates are highly unstable and convert into smaller oligosaccharides, therefore are remarkably difficult to synthesise.

‘This is an exciting first example of the linkages between sugars in oligosaccharides being rendered dynamic by the creative use of an enzyme,’ says Jonathan Nitschke, an expert in supramolecular chemistry from the University of Cambridge, UK. ‘Such concatenated sugars are useful in contexts ranging from pharmaceuticals to encapsulation (as with the cyclodexterins studied), so I would anticipate others being quick to build upon this proof-of-concept by generating further new sugar structures.’ Indeed, Beeren also plans to apply the approach to synthesise other sugars and to optimise it as ‘a fuelled, far from equilibrium system, where we combine different enzymes’.