Researchers have put forward a theory to explain the intrinsic photostability of DNA that is based on relieving antiaromaticity.

The theory resulted from a collaboration between Judy Wu’s research group at the University of Houston, US, and Henrik Ottosson, of Uppsala University in Sweden who were investigating the photodeactivation mechanism of A·T and G·C Watson–Crick base pairs. When UV light irradiates and excites DNA, it must return to a ground state quickly to avoid harmful side reactions that could cause mutations. This photodeactivation mechanism is widely accepted to be via a process called proton-coupled electron transfer, or electron-driven proton transfer, whereby an electron transfers from a purine base (A or G) to a pyrimidine base (T or C), alongside a similar proton transfer, before both transfer back to their original molecules. During this process, the energy from the UV irradiation is converted into vibrational energy in the hydrogen bond between the base pair, allowing the molecule to return to the original ground state.

‘In earlier studies, people focused on different aspects of the proton-coupled electron transfer mechanism, trying to figure out if an electron transfers first or a proton transfers first, using sophisticated theoretical and experimental methods, and taking a very physical approach to looking at the problem,’ says Wu. ‘Our work takes an organic chemists’ approach, looking at how the molecular structure of the base pairs affects why the reaction happens.’

The team focused on aromaticity and antiaromaticity, core organic concepts that feature in many undergraduate organic chemistry courses. Hückel’s rules state that if an organic compound is cyclic, planar, π-conjugated, with [4n + 2] ring π-electrons, it will display aromatic properties, with high stability, as is the case for the Watson–Crick base pairs in the ground state. In accordance with Baird’s rule, these rules reverse in the excited state, to give antiaromatic properties, with low stability and high reactivity.

By evaluating different indices relating to antiaromaticity, such as bond lengths, magnetic shifts and electronic properties, Wu and Ottosson were able to demonstrate strongly antiaromatic properties for purine bases in the excited state. They hypothesise that the electron transfer process from the purine to the pyrimidine occurs to relieve this antiaromaticity, removing any destabilising interactions, and reverts the purines back to their stable aromatic ground state. 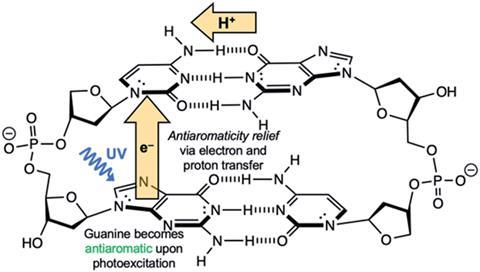 ‘In this work, the well-known concepts of aromaticity and antiaromaticity proposed by Hückel in 1931 are related in an intriguing manner to the photochemistry of DNA and to prebiotic evolution,’ comments Wolfgang Domcke, an expert on the photostability of biomolecules from the Technical Unviersity of Munich in Germany. ‘More generally, the novel concept of relief of excited-state antiaromaticity might serve as a guideline for future designs of supramolecular systems that can harvest solar energy by electron-driven proton transfer processes.’

Ottosson is also excited by the possibilities arising from their findings. ‘Excited-state antiaromaticity has very broad applicability, everything from pharmaceutical chemistry to astrochemistry, biophysics, organic electronics and so on. It’s a growing area and I look forward to seeing where the field goes over the next 10 years.’