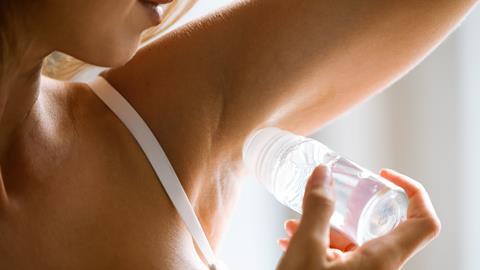 This week, a compound that's part of all of our lives, whether we know it or not. Filling us in is Josh Howgego:

You may not realise it, but there's a pretty good chance you are wearing a cyclodextrin - or perhaps even several - right now. If not, the odds are that they'll be residing under your kitchen sink. And even if you escape inclusion in these two groups, you'll definitely have cyclodextrins inside your body. So - really - you have no excuse for not listening to the rest of this podcast!

Cyclodextrins are small, circular polymers of the sugar glucose, typically containing six, seven or eight glucose molecules in the ring, with each size being known as alpha, beta or gamma cyclodextrin, respectively.

What makes these molecules interesting is their shapes. You can imagine them looking a bit like a mixing bowl with the bottom punched out. One opening is narrow, and the other a bit wider. The circumference of each opening is different because of the structures of the sugar in the polymer. The other important feature is that the walls of cyclodextrins are hydrophobic, but the rim - which is trimmed with OH groups - is hydrophilic.

Chemical structure of the three main types of cyclodextrins

Because of their bowl shape and this amphiphilic character, cyclodextrins make very versatile pockets for binding a range of small molecules. And because they are circular, they can also slot on to portions of larger molecules, even if they can't encapsulate the whole thing.

So, how do these molecules end up in your cupboards or in you? Well, their properties make them handy additions to a range of household products. One example is deodorants. I recently spoke with a fragrance scientist and she explained that for a customer to feel they're getting good value from their deodorant, they want to be able to smell it for as long as possible. To do that, it's important that the fragrance chemists get a good balance of odour molecules in the product, so that they evaporate into our noses in a constant stream over the course of the day - not too quickly, but fast enough that we notice them.

The goal these days though, is to go even further and create 'smart' fragrances that can provide a booster hit of scent when needed. In an ideal world, smart fragrances would be able to start releasing a higher frequency of pleasant-smelling molecules as you start to exercise, for example.

Believe it or not, cyclodextrins hold the answer to this need. Chemists can load cycodextrins with odour molecules, whose chemical nature mean they enjoy the hydrophobic interior of the cyclodextrin pocket. The cyclodextrin-odorant complex then sits on the skin quite happily. It's so big that it's completely involatile and doesn't evaporate. However, it's only stable until something else comes along - and that's water.

So picture the scene: you're playing that all-important squash game against the boss. It's a hard-fought game and, despite your zealous application of anti-perspirant, you begin to sweat. But it's not just your hopes of remaining a reasonable smelling human being in front of the boss that are beginning to dissolve. As you start to sweat, the cyclodextrins dissolve too, and the fragrance molecules are released from their greasy grip, releasing a wave of freshness upon your fortunate neighbours.

Cyclodextrins have just saved your reputation on the squash court, but they are capable of saving your life in a medical sense too. Just as odour molecules can fit into their bowl-shaped cavities so too can drug molecules.

The first patent on this subject was filed as early as 1953. And the first major drugs to be formulated as inclusion complexes inside cyclodextrins were the prostaglandins. These hormone-like compounds have cyclic head groups with chains of carbon atoms hanging off them. The cyclodextrins encapsulate these chains and protect the drug from being broken down by the body before they can actually reach their site of action and do some good.

Cyclodextrins are also known to bind cholesterol molecules strongly. The food industry has seized upon this fact since too much cholesterol in the blood is bad for you. Totally cholesterol-free products are manufactured by mixing foods with cyclodextrins and then removing the cholesterol-cyclodextrin complexes which quickly form.

This cholesterol binding ability has even greater relevance for sufferers of Nieman Pick disease. This genetic condition means the proteins that normally transport cholesterol across cell membranes don't work properly and this can lead to catastrophic brain and liver failure. There has been some speculation by scientists recently that cyclodextrin derivatives might one day be used as transporters to replace the faulty proteins.

So despite the fact that you may not have heard of cyclodextrins before, they're a fantastically useful group of molecules. And the next time you get a noseful of body odour you can dreamily think of cyclodextrins and their captivating chemistry. They may not be a household name, but their ubiquity in household products means every home must have one.

And every home probably does. With the fragrant, medicinal and cholesterol-binding chemistry of cyclodextrin. Now, next week: listen closely, as all seems to have gone quiet.

'The birds - where had they gone? Many people spoke of them, puzzled and disturbed. The feeding stations in the backyards were deserted. The few birds seen anywhere were moribund; they trembled violently and could not fly. It was a spring without voices.'

That was part of the preface of the first great popular environmental book, Silent Spring by Rachel Carson. Opening with a vision of an imagined town in America, the book describes how the use of a pesticide had, in Carson's words 'already silenced the voices of spring in countless towns in America'. This poetic polemic, from an aquatic biologist turned writer, sounded the death-knell for widespread use of a compound that had, in fact, saved many human lives - dichlorodiphenyltrichloroethane, better known as DDT.

And to find just how DDT saved these lives as well as the chemistry causing it to be both loved and hated, join Brian Clegg in next week's Chemistry in it's element. Until then, thank you for listening. I'm Meera Senthilingam.