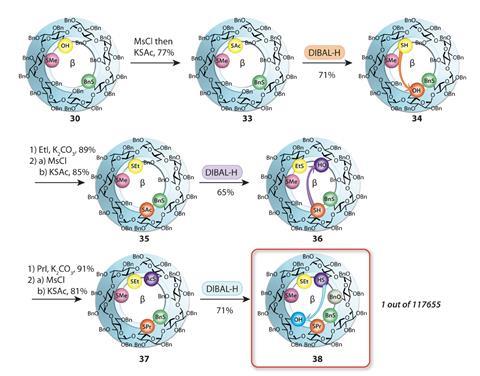 Attaching a thioacetate orienting group to β-cyclodextrin has allowed chemists to attach seven different substituents to all seven of its identical sugar units, creating just one specific hepta-functionalised isomer out of the almost 200,000 possible.

Cyclodextrins are cyclic oligosaccharides made out of six (α), seven (β) or eight (γ) glucose subunits connected by glycosidic bonds. Despite being water-soluble, their centre is hydrophobic and big enough to host other hydrophobic molecules. This makes them popular in air fresheners like Febreeze, as they can trap foul-smelling molecules – once trapped in a cyclodextrin’s cavity, they can no longer be smelt. Cyclodextrins also help stabilise and solubilise drugs like hydrocortisone.

In the 1960s, cyclodextrins were identified as potential enzyme mimics as they can bind to and release other molecules. But research in the following two decades slowly died out as it proved difficult to create more sophisticated, functionalised varieties. As cyclodextrin’s sugar subunits are identical, a random reaction with seven different reagents would statistically produce a mixture of 117,655 different molecules, from seven with seven of the same substituent to 720 bearing seven different substituents.

A team of chemists from France has now, for the first time, managed to create one of these molecules from the potential synthetic mountain. This is the first precise synthesis of a hepta-functionalised β-cyclodextrin with seven different substituents. Previous attempts achieved a maximum of four different functionalisations, often through lengthy separation procedures to part the molecule from its regioisomers.

The synthesis builds on an α-cyclodextrin functionalisation the same team developed in the early 2000s, which used azide and vinyl groups to orient reactions to other sugar units around the ring. But for β-cyclodextrin, the researchers had to come up with new directing groups, which they found in thioesters, after the molecule refused to react further once the ring had accumulated three substituents.

Starting off with a β-cyclodextrin in which all hydroxy groups had been benzylated, a thioester is installed at one of the sugar units. This directs the following reaction, a tandem debenzylation–reduction, to the sugar unit on the opposite side of the ring. The former thioester, which had lost its ester group during the reaction, is methylated to render it unreactive whereas the new free hydroxy group is converted into another thioester to start a new cycle in the reaction program.

After five more iterations of this algorithm, the team arrives at the final hepta-differentiated cyclodextrin in 21 steps and with an overall yield of 0.6%.